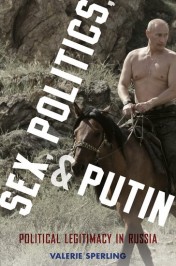 A key element of Vladimir Putin’s legitimation strategy has been the cultivation of a macho image. His various public relations stunts subduing wild animals, playing rough sports, and displaying his muscular torso, drew on widely familiar ideas about masculinity. The purpose was to portray Putin as a strong, decisive leader who could be counted upon to solve challenging problems with a convincing mixture of cool levelheadedness and the credible threat to use force as needed. But while masculinity is demonstrated through such displays, it is also reinforced by the sexualized attention of traditionally feminine, attractive young women.

The mobilization of masculinity as a political resource has been visible in Putin’s birthday gifts, as well as in other Putin-oriented cultural productions. While Putin has been receiving elaborate birthday presents almost since the start of his first term as Russian president, this post largely focuses on a handful of gifts in recent years that have come from organized pro-Putin activists and emphasized Putin’s masculinity.

In October 2010, as a gift for Putin’s 58th birthday, twelve female students and alumni of Moscow State University’s prestigious journalism department published a calendar featuring photographs of themselves looking as if they had walked out of a Victoria’s Secret catalog. Offering witty, sexualized quips, each young woman suggested herself as a potential lover for Mr. Putin. “You put the forest fires out, but I’m still burning,” smiled a student illustrating the month of March. In a similar vein, in July 2011 a group called Putin’s Army announced an “I’ll Rip [It] for Putin” contest with a video that got over 2.5 million hits. The clip featured a buxom young woman ripping open her tank top to demonstrate her dedication to Putin. In October, Putin’s Army continued its activity by filming a video for Putin’s fifty-ninth birthday. Promising that their birthday gift would be “the sweetest,” a handful of women wearing only underpants and white button-down shirts were shown baking their idol a chocolate birthday cake (decorated with a heart) while squirting whipped cream into their mouths. An email-hacking incident in 2012 revealed that the Kremlin-sponsored youth group, Nashi, had funded Putin’s Army along with a range of other pro-Putin web projects.

Nor did pro-Kremlin groups let Putin’s 60th birthday pass without a new proclamation of young women’s love for the president. In early October 2012, the United Russia party’s youth wing, Young Guard, produced a video for the occasion featuring attractive young women mimicking a variety of Putin’s manly exploits (flying a fighter jet, playing ice-hockey, and scuba diving for “ancient” pottery). In each setting, the women’s femininity was exaggerated, and most of them were shown receiving a text message from Putin (“The Very One”) while carrying out their feats. The final scene, over the strains of “Blueberry Hill” (which Putin had sung at a celebrity fundraiser two years earlier), showed all the women standing together on a city street, waiting in great anticipation — with a birthday cake — for Putin to arrive. The clip closed with the “Blueberry Hill” lyric ostensibly ringing in each woman’s mind: “My dreams came true.” The video playfully spoofed Putin’s stunts while upholding his image as a highly desirable man from the standpoint of the women who thrilled over his text messages and grew giddy at the prospect of seeing him in person.

If pro-Putin youth groups presented any public gifts to the president in 2013, none attained viral status on the Internet. Putin spent his birthday in Bali that year at the APEC summit, where he was serenaded with “Happy Birthday to You!” by Indonesia’s president. Putin was also the subject of a music video released the previous day, written and performed by a St. Petersburg artist, Aleksei Sergienko, who had made the news a year earlier after showing fifteen portraits of Putin at an exhibit titled “The President. A Kind-Hearted Man.” Sergienko’s song, titled, “Hang in there, man!” (Muzhik, derzhis’!), repeatedly encouraged Putin to “hang in there” as he resolutely confronted challenges ranging from Pussy Riot’s insults to European demands for LGBT rights. “We wish him strength,” explained Sergienko.

In 2014, playful presents from pro-Kremlin youth groups addressing Putin primarily as a manly sex object gave way to birthday offerings with a more grandiose and nationalistic tone. The latest such group, called Network — formed “from the ashes” of Nashi— produced two gifts starkly emphasizing Putin’s achievements as an unshakeable national leader navigating a hostile international environment. The first was an art exhibit, organized for Putin’s 62nd birthday, featuring artistic renderings of “The Twelve Labors of Putin” (modeled after the Twelve Labors of Hercules). Here Putin could be seen shielding Russia from the economic sanctions (rendered as serpents) imposed after Russia’s takeover of Crimea, and beheading the Hydra-head belonging to the US. Network’s second gift was a series of giant patriotic murals emblazoned on walls in seven Russian cities, each illustrating one of Putin’s achievements for Russia: Strength, Remembrance, Arctic, Sovereignty, History, Security, and Olympics — an anagram for the Russian word “Spasibo” (thank you). As Network’s press secretary explained, under Putin, Russia was winning. With Putin in charge, the state, like its leader, was now seen as strong, tough, victorious, and — naturally — manly.