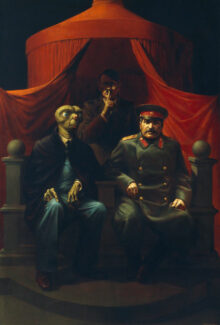 This piece originally appeared on Transitions Online (TOL) on April 28, 2020.

Peter Rutland is Professor of Government at Wesleyan University.

Amid the pandemic, Russia, China, and others find time to debate the timing of the beginning and end of World War II and other details of years long past.

The “memory wars” over World War II show no sign of abating. This month saw new developments in Moscow, Beijing, and Prague. Different countries have different stories. For China the war began in 1931, for Britain 1939, for Russia June 1941, and for the United States it was in December 1941. There is even disagreement about when exactly it ended.

On 24 April Vladimir Putin signed into law a decision to commemorate the end of World War II against Japan on 3 September – and not 2 September, as had previously been Russian practice. Japan signed the surrender on board the USS Missouri in Tokyo Bay on 2 September 1945 – which is the day that the U.S. marks the occasion.

Putin’s decision was greeted in China, where the end of the war has always been logged as 3 September. It signals the ideological alignment of Russia and China — at a time when tensions have been rising because of mutual recriminations over the coronavirus epidemic.

The Soviet Union was a latecomer to the fight against Japan. Wary of a war on two fronts, in April 1941 Stalin signed a five-year neutrality pact with Japan. At the Yalta Conference in February 1945, Stalin promised the allies to attack Japan three months after the defeat of Nazi Germany. The U.S. did not know if the atomic bomb would work, and wanted Soviet help to invade the Japanese homeland. In April 1945 the Soviet Union informed Tokyo it would withdraw from the neutrality pact in April 1946.

Soviet troops attacked Japanese-occupied Manchuria on 8 August 1945, three days after the atomic bomb was dropped on Hiroshima and just hours before the bombing of Nagasaki. Six hours after Soviet forces crossed the border, back in Moscow Foreign Minister Vyacheslav Molotov issued a declaration of war. On 15 August Emperor Hirohito made a radio broadcast announcing his surrender, and on 17 August Japanese forces in China declared a cease-fire. On 18 August the Soviets launched amphibious landings in Korea, South Sakhalin, and the Kurile Islands, permanently seizing the latter territories from Japan. (As a result of which, Japan and Russia have never signed a peace treaty formally ending the war.)

It took weeks to actually wind down the war. A surrender ceremony took place in Nanjing on 9 September, and some Japanese units fought on in Burma until 13 September, and in Hong Kong until 16 September.

Stalin organized a parade in Moscow to mark the victory on 3 September 1945, and ceremonies were held on that day in 1946. A total of 1.8 million medals were issued to Soviet veterans of the Japanese war, stamped with 3 September. But in 1948 Stalin changed the date of commemoration to 2 September, and that is where it stayed – until last week.

The change came “at the request of veterans” according to Georgii Karlov, a State Duma deputy who introduced the amendment on 14 April. A TV report added that it meant “a more objective representation of the role of the Soviet Union in the war.” There are some signs of grassroots support for the change. In 2019 in the remote Siberia town of Ust-Kut, local historian Svetlana Pishennikova had organized a commemoration of the war’s end on 3 September.

But some civic groups complained, pointing out that the new ceremony will fall on the same day as the tragic terrorist attack on a school in Beslan on 3 September 2004.

In recent years, China has put a new emphasis on its “14-Year War of Resistance Against Japanese Aggression.” Under Mao, the war with Japan had been downplayed in official propaganda, since most of the fighting had been led by Chiang Kai-shek’s Chinese Nationalist Party. Deng Xiaoping started rebranding WW2 in 1985, writing China into the global struggle against fascism in both its Nazi and Japanese variants. It was not until 2015 that China held a military parade to celebrate the defeat of Japan – a ceremony attended by Putin.

Not only is the end of the war open to revision – but also when it began. In January 2017 the Chinese Education Ministry declared that the war started on 18 September 1931, when Japan occupied Manchuria, and not 7 July 1937, when it invaded the rest of China, as had previously been the official start date. The move might have been a response to the controversy over Japanese history textbooks – with Prime Minister Shinzo Abe’s visit to Pearl Harbor in December 2016 attracting a lot of criticism from China. A decade earlier, China had started marking 18 September as “National Humiliation Day.”

Earlier this month, the district of Prague 6 removed a statue of Marshal Ivan Konev, the commander of the Soviet forces in 1945, after it had been repeatedly vandalized (Konev is an unpopular figure because of his part in suppressing some of the liberalization movements in the Soviet bloc, including the Prague Spring). The decision triggered outrage and the threat of a lawsuit from Moscow, which decried the supposed rewriting of history to denigrate the role of Konev’s troops in freeing much of Czechoslovakia.

Most countries mark the Nazi surrender on 8 May 1945, but the Soviet Union – and now Russia – mark 9 May as Victory Day. This is because a division of the Vlasov Army – former Russian POWs recruited by the Wehrmacht – had entered Prague on 6 May to drive out the German occupiers. It was not until 9 May that Konev’s troops captured the Vlasov division, which Moscow still labels as traitors. In December 2019 the town of Reporyje, 10 miles south of Prague, announced it would build a monument to the Vlasov army, which had been based there.

All of these discussions about dates and liberations may now be moving past the academic and into a more dangerous phase. For the past few days, Czech media have been reporting that Moscow’s anger reached such a level that a Russian intelligence officer was dispatched to Prague with a suitcase of poison to enact revenge on the mayors of Prague 6, Reporyje, and the capital itself (Zdenek Hrib, who also enraged the Kremlin by renaming a square in front of the Russian Embassy in Prague after Boris Nemtsov). While Russia denies the accusations, all three politicians remain under police protection, according to Czech media.

Meanwhile, Putin’s elaborate plans to mark the 75th anniversary of Victory Day on 9 May are on hold due to the coronavirus epidemic. Putin used the “struggle against fascism” as an excuse to justify the 2014 annexation of Crimea, so Western leaders are now reluctant to take part in commemorations alongside Putin. It is possible that Putin will postpone the 75th anniversary from 9 May to 3 September – in which case the coordination of the date with China makes even more sense. But according to one report, Japan’s Prime Minister Abe has said that if the date is shifted to 3 September he will not attend the ceremony in Moscow. The date debate continues.