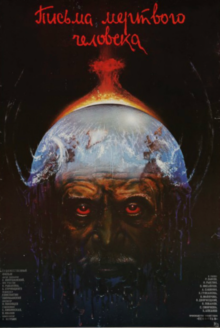 Above: the theatrical release poster for Konstantin Lopushansky’s Letters of a Dead Man (1986)

Thomas Schaffner is a graduate student at Harvard’s Davis Center. His research interests include Soviet culture and historical memory in Eastern Europe.

The whole history of mankind is the history of the slow suicide of living matter, that by pure accident acquired the ability to think, but did not know what to do with this accidental ability … It could not find any better use for this ability than the creation of the most effective ways of total suicide.

Fear of nuclear annihilation shaped much American and Western European fiction during the Cold War. In the Soviet Union, images of unwinnable nuclear war instead had to be distanced from geopolitical reality with the use of allegory. However, the state-endorsed arms limitation movement and the development and widespread acceptance of nuclear winter theory allowed fictional depictions of nuclear devastation to enter popular media in the 1980s. These images likely influenced the perception of nuclear technology in general in the final years of the Soviet Union.

The imagined future held a position of high importance in Soviet reality. On notable anniversaries, party committees designed time-capsules as official messages to the “comrade descendants” living in a future communist society. One Novosibirsk capsule from 1967 — to be opened on the centenary of the Bolshevik Revolution — declared “[w]e know our time is interesting, but yours is even more interesting. We are building communism, you are living under communism … [We believe that] you continue to explore space, and that your spaceships have travelled far through the galaxy.” In late socialism, the possibility of future utopia justified the present system.

The elevated position of the imagined future in Soviet society meant that speculative fiction became an intrinsically political genre. Starting in the 1950s, as the American public began to understand the destructive potential of nuclear weapons, American science fiction often expressed the fear of nuclear apocalypse. In the Soviet Union, authors of science fiction and often spy novels instead framed the atomic bomb as a tool of Western, anti-Soviet, imperialist machinations. Official discourse regarded nuclear weapons as dangerous only insofar as the enemy might use them against the Soviet Union, which took depictions of civilization-ending nuclear wars off the table as automatically implying Soviet defeat.

Under Khrushchev, Soviet writers briefly enjoyed fewer restrictions just as the USSR and US both began to look towards space, meaning that speculative fiction increasingly depicted utopian visions of a distant communist future. In The Andromeda Nebula (1957), Ivan Yefremov, a paleontologist turned novelist, imagined a future society that had achieved communism and set its attention to pursuing scientific exploration and space travel. Yet even this utopia contains a warning about humanity’s self-destructive potential. The crew of a spacecraft arrive at a planet called Zirda to find that all life had “perished from the accumulation of harmful radiation after numerous careless experiments, and the rash use of dangerous types of nuclear energy.” Yefremov placed his warning about the dangers of radiation and unchecked scientific experimentation on a distant alien world. It would not be until the 1980s, as the Soviets embraced bilateral arms reduction, that images of nuclear apocalypse on Earth emerged in popular media.

In the early 1980s, the Soviet Union’s official acceptance of nuclear winter theory, which proposed that even a limited nuclear exchange could have civilization-ending effects for all of Earth, had an immediate impact on Soviet science fiction. While the CIA viewed the theory as an attempt to “convince Western publics, and ultimately their political leaders, that arms reductions are necessary,” domestic Soviet audiences were soon exposed to nuclear winter’s imagined effects, particularly through film.

Konstantin Lopushansky’s Letters of a Dead Man (1986) is perhaps the strongest example of the period’s apocalypse-themed fiction. Released in the immediate wake of the Chernobyl disaster, the film portrays the survivors of a nuclear war living in an endless irradiated twilight. The imagined environmental impact of nuclear war is shown in detail. The sky has turned grayish-yellow from the ash now clouding the atmosphere. Some areas are frozen over. Radiation slowly and inevitably poisons the survivors, who must wear several layers of protective equipment, eerily similar to those worn in reality by the Chernobyl liquidators, to venture outside their makeshift shelter.

In Letters of a Dead Man, the nuclear war that doomed humanity did not result from any act of aggression, but rather a mutual mistake. The main character recalls that he “heard a scream from the electronics center: ‘It’s a computer error, cancel the missile launch!’ … [the silo operator] was drinking coffee, choked and was 7 seconds too late.” The existence of the weapons themselves and humanity’s tendency to make errors, not the ideology of those who owned the weapons, is what destroys the world.

The Chernobyl disaster has been cited as the source for the anti-nuclear energy movement that emerged in the Soviet Union’s final years. Yet even before the disaster, Soviet fiction had begun to show the effects of radiation and humanity’s tendency towards self-destruction. While civilian nuclear energy and nuclear weapons are very different things, both use radiation. The fictional environment depicted in Letters of a Dead Man thus only intensified the existing specter of dangerous radiation circulating within the Russian cultural imaginary.