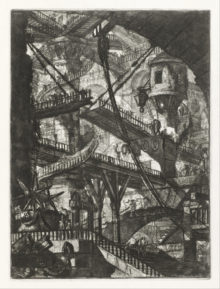 Katherine Bowers is an Assistant Professor of Slavic Studies at the University of British Columbia. She is working on a book about the influence of gothic fiction on Russian realism and is one of the #CP150 co-organizers. She tweets about books, writers, and other interesting things @kab3d.

“The novels of Dostoevsky are seething whirlpools, gyrating sandstorms, waterspouts which hiss and boil and suck us in. They are composed purely and wholly of the stuff of the soul. Against our wills we are drawn in, whirled round, blinded, suffocated, and at the same time filled with a giddy rapture,” wrote Virginia Woolf in “The Russian Point of View.” For me, this exactly describes how I feel reading Crime and Punishment Part 6. The tension between Raskolnikov’s two paths—Sonya’s way out (resurrection through repentance) and Svidrigailov’s (suicide)—builds to a fever pitch and I get consumed.

I had a vision that I’d create an ending for our Twitterized version of the novel to rival that of Dan Sinker’s amazing @MayorEmanuel, which began as a parody account tweeting coverage of the 2011 Chicago mayoral election, took on a life of its own, and ended up with a narrative arc that was decidedly epic in nature. The feed was even later sold as a standalone novel, and was just as riveting to read in book format as it had been in real time tweets over the course of that year. Following @MayorEmanuel in 2011 showed me what Twitter narratives are capable of doing, and I was eager to see whether I could reproduce Dostoevsky’s taut novel ending in the medium. I excitedly sat down to read and work on the tweets…

… and, well, I wasn’t exhilarated.

This came as something of a surprise to me. For those following the Twitter feed, Parts 3, 4, and 5 of the novel follow closely one after the other, all within the space of about 48 hours. Part 5 takes place entirely during a 2-hour window and ends with an incredibly tense moment when Svidrigailov reveals that he’s overheard Raskolnikov’s confession to Sonya. Dostoevsky leaves us with a cliffhanger… but Part 6 doesn’t pick up that loose end. Instead, the tension drops off, and Part 6 begins the next day… or the day after. As a tweeter, I was confounded by a couple of lines I had never paid that much attention to while reading the novel before:

For Raskolnikov a strange time had begun: it was as if a fog had suddenly descended, trapping him in hopeless, oppressive isolation. Recalling this time much later, he surmised that he’d experienced, now and then, a dimming of his consciousness, and that this had continued, with a few intervals, right up to the final catastrophe. (trans. Ready, p. 527)

Brian Armstrong talked about the reader not knowing what was real or not in his blog post. But, in the beginning of Part 6, one difficulty is that Raskolnikov doesn’t know what’s real. The first pages of Part 6 are confused and confusing as Raskolnikov navigates St Petersburg, trapped in a mental fog that doesn’t lift. My task was figuring out how to express this in Twitter. Would Raskolnikov go completely silent, as he had during July 10-14 when he was ill? I didn’t think so. After all, in the narrative, he’s out and about around town, going places, doing things, trying to meet up with Svidrigailov, actually meeting up with Sonya. Events happen during this foggy period and the novel goes on. I hadn’t noticed before that the beginning of Part 6 is told in retrospect, after Raskolnikov has figured out what’s real and what’s not. Some events—like one of the services over Katerina Ivanovna’s body in the Marmeladovs’ apartment, or waking up under a bush—are relatively lucidly described, but others—planned meetings with Marmeladov, visits to some Petersburg locations—blur into his mental fog. Still, if Raskolnikov was tweeting them all along, and unable to distinguish between waking and dreaming, between real and unreal, would the twitter record of this time have the same lucid quality all the time? Or only some of the time? Closely following Dostoevsky’s text meant that only the lucid events feel real, but adding images or Google Street View links lends more of a sense of the real to the tweets that are less concretely sketched out.

The Part 6 opening period of fogginess seems at first to undermine the narrative arc that has been building up through Parts 3-5; it signals a change in style in the text, a turn to a less fevered, more retrospective voice. In terms of the @RodionTweets project, this shift naturally corresponds to a sudden diminishing of tweet frequency. Part 5, taking place over the course of a 2 or 3-hour period on July 16, includes an intense 80+ tweets, but July 17, the first day of Part 6, has only 8. One would guess that this drop off would result in a less well-defined sense of narrative, as in the text’s described fogginess. Intriguingly, though, through the prism of Twitter, there is no such shift. The small 140-character-or-less snippets of Dostoevskian psyche are published and appear to their audience out of context in most cases. Only through a site like Storify, which allows forcuration and preservation of a Twitter story tied to a specified chronology, can the narrative be reconstituted. As @RodionTweets’s anxious, confused, or dreaming thoughts go out, they mingle with other tweets in readers’ feeds, become lost, are retweeted out of chronology (sometimes days later); the result for those following is more a sense of Dostoevskian atmosphere than a tightly narrated retelling of the novel that sucks one into a Woolfian whirlpool.

Partially, this lack of narrative force in Twitter is due to the fact that Part 6’s riveting timeline comes apart at the seams when broken into 140 character bites and set to a Twitter feed’s unyielding schedule. Reading the novel, time seems to contract and expand with the narrative’s excitement level. The four days of fogginess seem to take place instantaneously—we zip by them in just a few pages, and coming off of the rush of the Part 5 ending, they hardly register. They serve merely to slow us down slightly, to give us a moment to catch our breath. We are further slowed, then, by dialogue, and interactions with other characters—in Part 6 various characters’ stories resolve, but these endings take place outside of Raskolnikov’s consciousness. Finally, on July 21st, the fog lifts and the novel concludes. Raskolnikov confesses, but the lead up to the confession takes place over just an hour. Before that hour, Raskolnikov himself doesn’t know whether he will confess (!)

Tweeting Part 6 has taught me that it’s difficult to build narrative force without access to the 3rd person narrator’s tools and tricks for, for example, making the novel time contract and expand in ways that tantalize readers and spur them on to read more. Being tied to a text that’s already written ties our hands in some ways. But, nonetheless, in the final tweets there’s a sense of urgency and purpose that comes through. Where does this come from, then, if not the narrator? It’s through Raskolnikov finally making a decision, putting a plan in motion, and following through in a way we haven’t seen him do on Twitter before, and haven’t seen in the novel since Part 1. In the spirit of that, and closure, I, too, like Brian, indulged in #steppingover and broke one of the cardinal rules of @RodionTweets Club (laid out by Sarah Hudspith in her Part 1 blogpost: Raskolnikov wouldn’t live tweet dialogue, but only report it after): I tweeted the confession. This spoils the realism, but in terms of the narrative, it adds a sense of conclusion that, I think, Dostoevsky, always in tune with what works on a narrative level, would have endorsed.

Once Raskolnikov confesses, then what happens? Like the novel, @RodionTweets will also have an Epilogue. Unlike the novel, which wraps things up in some thirty pages, it’ll be drawn out… the tweets will keep going, scheduled in and spread out over the next 18 months… until Raskolnikov has faded away.

This is part 6 of a series of posts on the experience of creating @RodionTweets. You can follow the Twitter account here. The introduction to the series is here. Click here to read Part 5 or here to go on to the final post in the series. More information about the #CP150 project can be found here.

The illustrations above are from Giovanni Battista Piranesi’s “Imaginary Prisons” series of etchings (1745-1750) and are in the public domain.