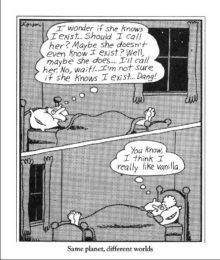 This is the final installment of The Turkish Gambit portion of “Rereading Akunin “.  For the introduction to the series, and subsequent installments, go here.

The illustration for this, the concluding entry in our series about Boris Akunin’s The Turkish Gambit, is one of my favorite Far Side cartoons of all time.  “Same Planet, Different Worlds” is the sad cut-line, referring to how completely irrelevant the man’s speculations about the woman’s feelings turn out to be. More cynically, it’s a motto that can be applied to all of us (or at least most of us) at some time or another, since the worlds inside our heads are so often galaxies away from each other.

Fiction is a temporary cure for this separation, obliging the reader to share the minds of the narrator and/or characters.  Not only that, the dictates of narrative economy insure that the characters in a story usually have common concerns.  This is particularly true of such genres as the mystery: if there’s a corpse in the middle of the room, it’s a safe bet that all the non-corpses surrounding it are probably thinking about that dead body.

The last two chapters of The Turkish Gambit (and, to a lesser extent, the epilogue) are a reminder of something else that fiction is good at: showing us how a group of people ostensibly living through the same events could have wildly divergent understandings of what’s going on.  Even though these chapters are technically not lacking in dramatic action, what with Varya being held hostage, a brief firefight with the Turks, and Paladin/Anwar’s suicide, Chapters 13 and 14 contain enough exposition to sink a lesser novel. This, too, is consistent with the mystery genre:  we want to know whodunnit, and when we find out, we want to hear about it in great detail.

What we discover is that, in serving as the prime mover behind most of the book’s plot, Paladin has engaged in a strategy that works primarily because everyone involved thinks they’re playing a different game from the one he’s playing, and are involved in a different story from the one he is in.

If Paladin has a superpower, it is his ability to see the story the characters think they are in, and tempt them into detrimental actions that are consistent with the story’s framework.  This was most obvious with Sobolev in the previous chapter: Sobolev is a hero in his own mind, and has dreams of being Russia’s savior.  So Paladin exploits his vanity, provoking him to take action that would bring Russia directly into conflict with the Western European powers.

Paladin excels at working with the materials at hand.  Confronted with the necessity of killing Kazanzaki and Zurov, he takes advantage of the tales of Kazanzaki’s “unnatural inclinations” to arrange a scenario that deflects the blame from the actual culprit.

Finally, as was already indicated in an earlier post, Paladin understands the geopolitical situation of Russia, Turkey, and Europe as part of a much broader, more complex narrative than the one in which the Russian Empire thinks it is involved.  In fact, his actions all aim at making this complex narrative a reality, transforming a smaller conflict into an all out-war between East and West that will make true revolution possible.

Even though Fandorin is the one who sees Anwar Effendi behind he mask of Paladin, it is Varya who finds fault in Anwar/Paladin, not simply on moral grounds, but as the creator and interpreter of stories:

“Just who are you to judge who is the bringer of good to civilization and who is the bringer of destruction? He studied the state apparatus, became acquainted with the leaders! And have you made the acquaintance of Count Tolstoy and Fyodor Dostoevsky? Have you read Russian literature? I suppose you had no time for that? Two times two is always four and three times three is always nine, isn’t it? And two parallel lines never intersect? In your Euclid, they don’t intersect, but for our Lobachevsky they have!”

“I don’t follow your logic,” Anwar said with a shrug. “But of course I have read Russian literature. It is good literature, no worse than English or French. But literature is a toy; in a normal country it cannot have any great importance. I am myself something of a literary man, in a sense. But one must do something serious, and not just compose sentimental fairy tales. Look at Switzerland. It has no great literature, but life there is incomparably more dignified than in your Russia.”

This is quite a revealing exchange, in that it highlights the traditional preoccupations of the intelligentsia in general and the hobbyhorse of Akunin in particular.   The centrality of literature to pride in Russia’s accomplishments, as well as literature’s function as the primary means in which ideas are tested, is certainly a truism.  Varya offers Russian literature up as the justification for Russia as a civilization: it compensates for all the political and civic institutions that the country lacks.  Anwar doesn’t disagree with Varya’s conclusions, but he cannot share her priorities.  If life in Switzerland is better, how could literature possibly be an adequate compensation?

Indeed, the readiness to accept the premise that literature and “quality of life” can somehow function on a civilizational balance sheet is in itself very consistent with Russian cultural traditions.  But Anwar/Paladin’s point about life being “incomparably more dignified” in Switzerland has to touch a chord with anyone who has been steeped in Akuniana for a significant amount of time.  As I indicated in an earlier post, Akunin is obsessed with personal dignity as the greatest of all virtues. This, too, makes sense, both in terms of Russian reality (which offers many challenges to personal dignity) and Anwar’s own framing of the question.

Anwar is brought short, however, by his own utilitarianism.  True, it is Varya who provides him the opportunity to weigh dignity and literature on an imaginary scale, but Anwar all too readily reduces literature to exchange value: Russian literature is “no worse than English or French.”  But the Russian literature to which Varya refers is of value precisely because it undermines the calculus of utilitarian value.  Though she mentions Tolstoy, her words are really rooted in Dostoevsky: “Two times two is always four and three times three is always nine, isn’t it?”

Perhaps this is why Anwar ultimately fails: He sees the stories in which all the other characters live, Varya included.  And he can manipulate people accordingly.  But he is not a good reader, because he is looking for the wrong thing: value.  He can make people’s stories intersect, but he doesn’t really understand the complex geometry of people’s lives.

Varya ends up with Petya after all.  But she clearly still has the hots for Fandorin, whom she calls by his first name when they part.

Erast Petrovich is on his way to Japan.  That trip takes place in the next novel, Murder on the Leviathan.  We don’t find out much about his time in Japan until several novels later, but by his return (before the fourth novel), he is, at last, the fully formed Fandorin.