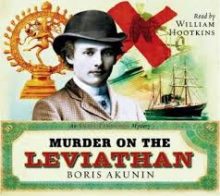 This is the final installment of the Murder on the Leviathan portion of “Rereading Akunin .’  For the introduction to the series, and subsequent installments, go here.

The third and final part of Murder on the Leviathan demonstrates just how clever Akunin has been with his pacing.  Part I is a bit of a slow burn, with the only actual murder to take place on the Leviathan (the killing of the escaped African slave) going unrecognized as a crime.  Part II gives us the motivation for the Paris murders (the hunt for the rajah’s shawl, which is the key to a vast fortune) and one more murder (Sweetchild).  The multiple points of view remind us that all of these characters are functioning in their own particular story genres, both a challenge to the pacing and an aesthetic reward the the reader.

Part III blows the whole thing up.  Just a few pages in, the ship is being sent off to certain doom, saved only by Sir Reginald Milford Stokes’s sextant and Fandorin’s wits.  The captain of the Leviathan had been dispatched in Part II, lured away with a false telegram about his daughter’s injury in a fire before succumbing to a stroke.  This leaves his first mate Renier in charge, and Renier seems determined to sink the ship and everyone on board (save himself, and, it turns out, one other).

Whether resulting directly from Renier’s actions or simply from some other, internal plot logic, Part III brings a cascade of revelations about the Windsor Room diners.  Sir Reginald’s sections have all been in the form of letters to his wife, but Fandorin reveals that the Englishman’s wife and unborn child died tragically, and that Sir Reginald’s mind has been unable to accept the truth.  For the reader, this comes out of left field, but it does have thematic resonance.  Erast Petrovich expresses sympathy for Sir Reginald because of his own losses at the end of The Winter Queen, while the entire novel is haunted by pregnant women and precarious births (the black baby scam, Renata Kleber’s pregnancy, the Rajah’s widow and son), not to mention interracial relationships (presumably not relevant to Sir Reginald).

Clarissa Stamp’s own story also resonates with Fandorin, in part because, after mooning over him for half the book, she all but throws herself at him. Fandorin commends her for her boldness, revealing that he considers himself “timid:” “There are two things I am really afraid of: appearing foolish or ridiculous and . . . dropping my guard.”  The loss of his bride has scarred him: “While I am alone, my defenses against fate are strong, and I fear nothing and nobody. For a man like me, it is best to be alone.”

Clarissa, meanwhile, is alone, but not by choice. At the end of Part II, Gauche reveals that Clarissa, after inheriting money from a distant relative, had gone to Paris in search of love, allowing herself to be duped by a gigolo.  Yet she, unlike Fandorin, is still wiling to trust.

But the most significant revelations are about three other characters: Renate Kleber, First Mate Renier, and Commissioner Gauche himself. Naturally, these revelations hinge on murder and miscegenation.

After Renier is prevented from crashing the ship, he is confined to a cabin where he writes a detailed confession, cut short by his apparent suicide (he allegedly bashed his own head in against a wall).  Renier, it turns out, was the son a French woman and the Rajah from the story of the shawl.  Poor Renier is trapped between two worlds: his father, a not particularly devout Muslim, taught him to read only a little Arabic, yet left him a hand-annotated koran.  When he and his mother move to France, he is tormented by his peers as a “hindoo” before abandoning school in favor of a life at sea.

He committed the murders in Paris in order to regain the shawl, the key to the inheritance of which he was robbed by British colonizers. What could be more appropriate for a man of his complicated and vexed background, a half-French, half-Indian, nominally Muslim man, than to kill someone over a koran and an “exotic” shawl using a statue of Shiva as a weapon?  That he accidentally leaves behind the whale badge (the clue that sets Commissioner Gauche on his trail), is also ironically appropriate:  his very identity is leaking all over the crime scene, with the whale badge representing the only part of him not yet signaled by the crime: his current life.

The revelation that Renier murdered Sweetchild is almost an afterthought, particularly when it becomes clear that Renier did not kill himself (which should not be surprising: how many people kill themselves by bashing their heads against a wall?). The self-satisfied, terribly respectable Commissioner Gauche found the untold wealth promised by possession of the shawl to be an irresistible temptation.  He killed Renier and claimed it was a suicide.  His murderer was….Renate Kleber, who claimed self-defense.

In case anyone had not guessed it by now, Kleber is actually Marie Sanfon, a fact revealed by Fandorin. Married to Renier, she accompanied him to the mansion where Renier killed the shawf’s owner, while she, who had nurse’s training, claimed to be a visiting nurse vaccinating the household (but actually giving them a lethal dose of a sedative).

Kleber/Sanfon is no ordinary murder or con woman:  she also has incredible chutzpah.  As the widow of the rajah’s son, pregnant with the rajah’s grandson, she asserts her rightful claim to the shawl.

As plot, Kleber’s assertion is just one more event among many.  But thematically, it’s the climax of the entire novel. Let me channel my inner Fandorin and enumerate the reasons:

Now Kleber, a sociopath who started her career of theft and murder as a child in Belgium (itself a complicated national construct) before traveling the world and changing (national) origin stories the way others change their clothes, presents herself as the only true heir to a stolen fortune, because she is carrying the mixed-race grandchild of the last rajah.  Now the tables are turned, and cosmopolitan miscegenation is the only source for actual legitimacy.

In the wake of these revelations, the surviving, non-murderous dining companions immediately fall to arguing over whose country deserves possession of this vast wealth, since they do not take the criminal Kleber’s claims seriously.  Once again, they revert to patriotic cliches, such as Clarissa Stamps declarations about Ablion’s fleet. Fandorin, after mentioning how useful the money could be for Russia’s coffers, “accidentally” throws the shawl overboard.

Here Fandorin breaks two important cycles: first, the self-defeating greed highlighted in the folk tale about the Maghreb merchants, and second, the colonial covetousness that has haunted the story of the shawl itself. This is fitting: in a struggle among Belgium, France, and England, the conflict is cut short by the only great power not to have overseas colonial holdings (Fandorin/Russia).

But this is not all: the novel ends with Fandorin’s life saved by representatives of the two foreign cultures that most define him  The first is Aono’s near-death as he saves Fandorin from being shot by Kleber, thereby discharging the obligation he felt towards the Russian who cleared him from suspicion in the previous section.  This is satisfying on the level of the novel’s internal logic, and even more so when we know how thoroughly intertwined Fandorin will be with Japan for the rest of his life.

When Kleber is stopped by Aono, she crashes into the British grandfather clock that Fandorin won in a raffle earlier in the novel.  The clock falls on her, but does not kill her or her unborn child.  This clock had been the object of ridicule when Fandorin, who is incapable of losing games of chance, became the inevitable victor.  It’s huge and tacky, and more of a burden than a blessing to a man bringing his belongings to the Far East.

How could this clock help but be symbolic? First, the raffle itself was to raise money for “fallen women,” and now the huge clock falls onto a woman who is pregnant with a “legitimate” child, but is, in all other ways, as “fallen” as they come.  Second, Fandorin himself is a bit of an Anglophile, in appearance, in linguistic proficiency (not that many Russians spoke Englsh at the time), and, most of all, in genre (the literary models for most of the Fandorin project).

And, of course, there is Akunin himself: Grigori Chkhartishvil is a translator from the English and the Japanese. Akunin may mean “villain,” but the countries most associated with his secret identity (Chkhartishvili) are the ones that saved his hero.  Perhaps, at the end of novel packed with low-level interethnic, international, and interracial strife, a little bit of cosmopolitanism can save the day after all.