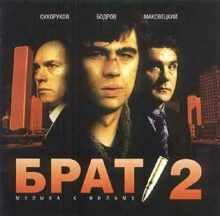 This post is the final installment of the Conclusion of Russia’s Alien Nations: The Secret Identities of Post-Socialism, an ongoing feature on All the Russias.  It can also be found at russiasaliennations.org. You can also find  all the previous entries here.

Most sequels disappoint because of their lack of imagination: after arriving at a winning formula for the first film, the producers do their best to recapture everything they think contributed to making the original entry a hit.  Brother 2 was a disappointment for many critics  but not quite for the same reasons.  True, the film does contain numerous call-backs to the first movie, but most of them are clever and funny (such as Viktor sitting in the kitchen with his crying mother, who tells him to go to the city in the hopes that Danila can sort him out).

The real problem with the film, as well as the source of its important as a key post-Soviet text, is that it is a sequel to the wrong movie.  Brother certainly nodded in the direction of nationalism (such as in Danila’s encounter with the Caucasians), and flirted with they idea of finding meaning and a message.  But Brother, like Danila, was essentially an empty vessel.  Or, more appropriate for a film, Brother was a screen onto which audiences could project their own fantasies, ideological and otherwise.  Brother 2 was not a sequel to Brother; it was a sequel to how a large part of the audience saw Brother.

Brother 2  engages in an extended nationalist wish fulfillment fantasy, even as it continues to confound customary categories (Danila buys World War II-era weapons from a young man who calls himself “Fascist” and decorates his hovel in Nazi paraphernalia; when Danila comments, “You know, my grandfather died in the war,” Fascist replies, “It happens:). The film also abandoned the pretense that Danila did office work during the war; now the premise is about Danila’s need to help his former comrades-in-arms. In Moscow, he fights thugs employed by a rich bigwigs who is selling out his country and Danila’s friend to a greedy American.  In America, he is cheated by a stereotypical Jew, gets into fights with African American thugs  in Chicago while one of his companions explains that white people are afraid of black people because the latter still have a “primitive strength” in them that “we” have lost.  He even saves a Russian prostitute from her black pimp, and the two of them fly back home to Russia, where they truly belong.

Drawing on the sociological work of Lev Gudkov, Irina Souch is correct when she identifies Brother 2’s national strategy as consisting of building up a Russian “self” in contrast to a series of negative “others,” and also when she notes that this is an intensification of a phenomenon already present in the first film. Florian Weinhold also makes a series of important points by analyzing Brother 2 within the context of the mob drama (which makes all the more sense when one factors in Chicago’s persistence as a mafia paradise in Russian popular culture). Taken together, their insights should remind us of another element of Brother that gets played up in the sequel:  Brother 2  is a road movie.

The Russian Federation is large and diverse, providing plenty of opportunities for our hero to encounter evil Others and define himself against him; even the first American character in Brother 2 appears in Moscow, not Chicago. Yet the plot obliges Danila and Viktor to travel abroad, serving as an excuse for delightful set pieces (such as Viktor’s interrogation by American customs about whether or not he has any salo (fatback) with him) while setting to rest a persistent myth that haunted late and post-soviet culture:  the idea that life is better outside of Russia.  Dasha the prostitute thought so, and when Danila meets her she’s doing crack and being beaten by a pimp; by the movie’s end, she proclaims to an Aeroflot flight attendant “We’re going home” as if this were the most significant statement in the world. Cue the film’s last, and most on-the-nose, Nautilus Pompilus song: “Goodbye, America.” As for a positive myth of Russian identity, Brother 2 eschews the concrete in favor of not just abstraction, but incantation  While still in Moscow, Danila is enchanted by a young boy’s recitation of a famous Lermontov poem about love for the motherland; by the end, as he climbs a series of fire escapes before mowing down a building full of drug smugglers and human traffickers, he recites the poem in a loop, in something verging on self-hypnosis. He then tells the film’s main villain:

Tell me, American. Where is strength found? In money? Well, my brother says it’s in money.  You’ve got a lot of money.  And so?  Here’s what I think: strength is in truth/justice (pravda).  Whoever has pravda is stronger.  You tricked someone, got lots of money.  Did you get stronger? No, you didn’t. Because you don’t have pravda. The one you tricked has pravda. That means he’s stronger.

It’s a great monologue, full of applause lines. But its relation to the actual story of Brother 2 is, at best, circular.  The villain is stronger, and the victimized party is weaker, until Danila comes along.  Danila is able to mete out justice, but is it because he is right (that is, because he has  pravda?), or because he is strong enough to enforce rightness? Within the film’s generic framework, this may well be a moot point, since all expectations for a plot like this demand that the good guy come out ahead, or that the one who comes out ahead be by definition good.  As viewers, we know that, at the very least, Danila is on the right side in this particular conflict (the snuff film viewed by one of the henchmen certainly drives this point home).  But Danila’s speech encourages a tautological understanding of righteousness:  might might not make right, but rightness and might are equivalent virtues.

Does Danila in the Brother movies come close to establishing a type, along the lines of the sovok, the New Russian, the Orc, or the gopnik?  In two of the most significant popular films to spark reflection on the nature of Russia, Russianness, and post-Soviet life, what does Danila show us?

Two decades later, Danila looks like a harbinger of the Putinist era, less because of his actions (fighting mobsters and corrupt officials, defending the weak), than because of the combination of vague blandness with even vaguer words about virtue, Russia, and “home.” His sense of self, both individual and national, is assembled from uninterrogated received notions that sound appealing.  This is an identity rooted as much in syntax as it is in history:  both “I” and “Russia” are the subjects of the sentence, the heroes of the story. They are good by definition, by their role in the narrative and their place in syntactic structure.

It is this vapid non-identity that simultaneously closes off the possibility for further soul-searching while inspiring the satirical venom of the Vatnik.  It supports the empty ideology of vague patriotism of the Putin era, with its equation of both national and individual Self with virtue (in opposition to a whole range of malign Others), and is so simplistic that more liberal-minded Russians can reject it out of hand.  The patriotism of Brother 2 is the cinematic corollary to Putin’s later declaration the the Post-Soviet period is over, or to Culture Minister Vladimir Medinsky’s declaration that schoolchildren should have only one textbook, so as not to fill their heads with “pluralism.” It is based on a kind of ideological magical thinking: if we say (and show) enough times that there are no more questions that need to be asked about the nature and future of Russia, it will become true.

This is the next stage in the evolution of Mikhalkov’s catch phrase: not, “He’s Russian. That explains a lot” but “He’s Russian, and he has nothing to explain.”