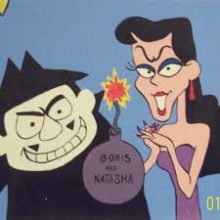 But what was the Eye of Sauron kerfuffle really about? If we take the Svechenie art group’s spokesman at his word, the last thing they had in mind was politics. If that is the case, then Svechenie was displaying a shocking geopolitical naiveté. Nothing says “Evil Empire” like the Eye of Sauron.

A bit later in this chapter, we will examine precisely how and why The Lord of the Rings has gained so much resonance in Russian culture, to the point where one of the series’ most loathsome antagonists (the orcs) becomes a self-mocking symbol of post-Soviet Russia.  The orcs, in fact, will be part of a veritable bestiary of fantastic identifies adopted, imposed, and resisted:  not just orcs, but wolves,  trolls and bears (oh, my!). But in order for that discussion to take on its proper resonance, we need to address the larger question of Western mass culture and non-Western audiences during and after the Cold War.

For all its complexities, the Cold War constituted nearly five uninterrupted decades of simmering conflict within a persistently dualistic framework: the U.S. vs. the USSR, capitalism vs. communism, freedom vs. totalitarianism, exploitation vs. economic justice, the brotherhood of nations vs. racist colonialism. It is a patently reductive model, whose failures and omissions (China, anti-colonialism, religious revival,  environmental  degradation, and the full spectrum of women’s and minority struggles for equal rights) outweigh its value as an analytical tool.  But discursively, one of the few things that both the US and the USSR agreed on was the centrality of the competition between the two blocs’ political and economic systems.

However, the two sides waged their war for hearts and minds on different fronts. Soviet mass culture featured relatively few stories of the standoff between the Soviet Union and NATO or the United States (in film and fiction, World War II was where the action was); instead, Cold War antagonism played itself out in the news, and in explicit propaganda, particularly the posters that were an unavoidable part of the Soviet visual landscape. In the United States and Western Europe, the story was different, in that the conflict was very much a story.  Not only were there endless spy dramas involving the Soviets and their lackeys, and fantasies of a future World War III between the superpowers, the very structure of the conflict replicated itself throughout Western popular culture.

Whether by accident or design, the Cold War coincided with a boom (or several boomlets) in Western mass entertainment that recapitulated the binaries of the conflict between the Eastern and Western Blocs.  Binarism is an integral part of adventure fiction and war drama, with the struggle between “good guys” and “bad guys” as a central feature of the superhero comics that had become popular in the run-up to World War II.  High Fantasy, as revived by Tolkien in the 1950s, tends to rely on a Manichaean metaphysics that often dispenses with all subtlety:  good battles evil, or the forces of light fight the forces of darkness.

Dualistic Western mass entertainment is arguably a more important contributor to the Cold War imaginary when it is not directly telling stories about the Cold War itself. The James Bond franchise has plenty of subtexts, but its Cold War plots are all simply text.  Moreover, fictional narratives that are actually about the Cold War travel badly across the East/West divide: from Ninotchka to The Hunt for Red October, the obvious failures at depicting Soviet reality preclude real identification by Soviet or post-Soviet audiences.  When Western Cold War dramas move East, they become little more than kitsch.

When Cold War dualism is transferred to the more purely imaginary realms of fantasy and science fiction, that is, to worlds other than our own, authors can decide whether or not to hint at the Cold War, and audiences can choose whether or not to see or impose the ideological conflicts of the “real” world onto the entertainment they are reading or viewing.  My argument is not that all dualistic F&SF mass culture of the Cold War era is an allegory of the Cold War; to the contrary, I would reject such a reductive interpretation with all the resolve Aragorn’s army of elves, hobbits, and men demonstrated at the Battle of the Pelennor Fields. Instead, I argue that dualistic storytelling popularized during the Cold War lends itself to being understood as an allusion to the Cold War, regardless of the authors’ intentions.  More important, these stories’ Manichaean frames worked in the opposite direction, allowing audiences to understand the Cold War in terms of fantasy tropes about good heroes and evil villains.

Next: Sith Lords of the World, Unite!