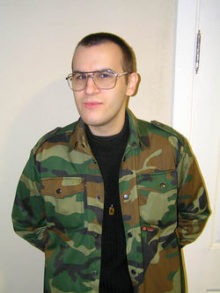 Kalashnikov’s and Krupnov’s The Rage of the Orc has been cited as the likely origin of the Russian orc Runet meme, but the search for a point of origin might be as much an exercise in fantasy as the primordialism I have just condemned.

Like all Internet memes, it spreads digitally, with no need of an original. It lurks in the comment sections of right-wing and SF-related live journal pages; in spirit if not in frequency, this borrowing from Tolkien is comparable to the invocation of the “red pill” throughout the anti-feminist manosphere (an appropriation of a term from The Matrix that has become  gloriously, unintentionally ironic, since we now know the film series was created by a pair of transgender sisters initially referred to as cisgender brothers).  While there are numerous essays and blogposts about the hidden Russophobia in Tolkien’s orcs, it took one notorious LiveJournal personality to make “orc-ism” a key part of one of his many manifestos: Vladimir Georgievich Frolkov,  the Aryan nationalist most famous first as “Yarovrat,” then as “heideg.”

After a long and tortured explanation about the difference between the “Rus” (the powerful, hypermasculine “wolf” man responsible for all of Russia’s victories and for the very nature of the Soviet Union) and the “russkii” (a slave, that which belongs to the Rus), an explanation that rejects Europe in favor of “Northwest Asia” and “Eurasia’ in favor of “Sakaharazia”, Yarovrat/heideg declares that the “true Russian ideology” is orc-ism.  This is the best of three possible paths for Russians:

Self-hatred: “We’re orcs, and we must become elves!”

Yarovrat’s protestations to the contrary, I would submit that the line between Orc-ism and “self-hate” is somewhere between thin and nonexistent.  If we keep in mind the frequent use of “Orc” as sarcastic self-reference in comment sections, usually referring to the West’s disdain for the “savage” and “unrefined” Russians, then the Orc’s true identity becomes clear:  the Orc is the latest incarnation of the Sovok, the Soviet yokel whose lack of civilized habits of thought and behavior was a source of simultaneous embarrassment, humor, and even pride.

But the Orc is not merely a fantasy-inflected, post-Soviet update of the Sovok; the Orc is the Sovok weaponized.