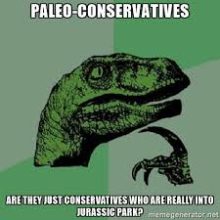 Politics, like fantasy and science fiction, is the art of creating and selling an imaginary world.  It can be the world yet to come: Stalin called on his people to create a “radiant future,” Bill Clinton built a “bridge to the twenty-first century” (as if we wouldn’t have gotten there without one), and Reagan’s “morning in America” promised the optimism of a brand new day.  It can just as easily be a restoration of past glory:  Trump bellows his plan to “make America great again,” Milosevic proclaimed a return to Serbian purity, and Putin, after “saving” Russia from an imagined imminent dismantling, is restoring his country to “great power” status  after years of humiliation.

Particularly telling is the increasingly frequent application of the American term “paleoconservatism” to Putin’s program; “paleoconservatism,” like the Paleo Diet, connotes a return to a Stone Age informed less by archeology than it is by Clan of the Cave Bear.  Linking ones politics to a purely fantastic world is but a small step. This might suggest Frederic Jameson’s famous connection of politics with science fiction and utopia, but the example I have in mind are is a more comfortable fit with “heterotopia”: we are dealing with political fantasies rooted in a different, not necessarily better world.  I bring you word of a small but vocal community of Russian patriots who voluntarily, if ironically, proclaim that Russia is not, as the old Soviet joke goes, “the motherland of elephants,” but rather, the motherland of Orcs.

Through a philologically suspect reading of J.R.R. Tolkien’s Lord of the Rings, this community has appropriated the trilogy’s largest contingent of villains in defiant response not just to the Manichaeism of Tolkien, but to the equally primitive binaries of the Cold War and its aftermath.  Though it is the result of a clever and subversive appropriation of the tools of postmodernism, the identification of Russians with Orcs is not deconstructive. Even when the same Tolkien references are used by the liberal opposition, the inherent dualism remains undisturbed.   Productive irony cannot save either group from the fact that they are simply reversing Cold War binaries rather than undermining their foundation. [1]

This tacit acceptance of dualism is consistent with the source material.  J.R.R. Tolkien has been accused of many things, but subtlety is not among them.  Nor is there even the faintest whiff of moral relativism in his most famous works.  After all, one of the hallmarks of old-fashioned high fantasy is a straightforward, dualistic cosmology, a worldview that encompasses works as apparently disparate as Lord of the Rings and Star Wars (a film series that is essentially epic fantasy with Death Stars instead of dragons).

Such heroic stories bring an extra appeal to the familiar F&SF phenomenon known as “world-building:” we are not only invited to share in the imagining of Tolkien’s  (or Lucas’s) imaginary world, but also find clear and compelling ethical positions for our own imagined selves to adopt.  This is the unjustly-maligned “escapism” that features the simplicity and moral clarity that the real world should best avoid (after all, Aragorn is basically trying to “make Middle Earth great again,” something even Tolkien’s fantasy world rejects when Frodo joins the elves in the exodus of magic from the land).

We have in Lord of the Rings a famously complex fantastic geography, history, and ethnography, in which all of the forces of good just happen to have languages and cultures with clear Anglo-Saxon roots, while the “dark” and “savage” enemy offers little resistance to familiar racist, orientalist tropes.  The very fact that Middle Earth contains “evil” races is, at the very least, problematic.  F&SF practitioners as varied as Michael Moorcock, David Brin, and China Mieville take Tolkien to task for his nostalgic feudalism and displaced racism.  [2]

It is the racism that is key here.  Where Russian critiques and reappopriations of Tolkien will be preoccupied with a geopolitical framework, English-language discussions are rarely concerned with international relations.  This makes sense, in that each community is reading Tolkien in line with their own most pressing concerns.

In 2001, Andy Duncan, after noticing that the early-twentieth-century segregationist senator Theodore G. Bilbo shared a last name with one of Tolkien’s most famous characters, wrote a short story imagining that the senator, now recast as Bilbo’s descendant, leading a racist campaign to keep non-Hobbits from immigrating into the Shire. The story gained little attention until it was republished in Duncan’s 2018 short story collection An Agent of Utopia. After the author was interviewed in Episode 336 of the Geek’s Guide to the Galaxy podcast (November 22, 2018), the question of Tolkien’s racism led to a brief culture war skirmish, ridiculed in The New Statesman and National Review, as well as on rt.com.

Reactionary defense of Tolkien could be dismissed as a familiar fandom phenomenon:  (mostly male) “curatorial” fans, who reject any attempt to reinterpret or play with beloved source material, and “transformative” fans, for whom the original stories are a springboard for creating something more interactive, resonant, and inclusive.  But even this divide in fandom has obvious political content, and it is exacerbated when dealing with faux-medievalist high fantasy such as Tolkien’s.  As recent controversies online and at the International Congress of Medieval Studies have shown, the alt-right are preoccupied with the Middle Ages as an imagined utopia of Whiteness, a preoccupation that spills over from scholarship and pseudo-scholarship into fan communities. [3]

In 2013, N.K. Jemisin, an African American woman who is among the most critically-acclaimed writers of F&SF in the United States, wrote a post on her blog entitled “From the Mailbag: The Unbearable Baggage of Orcing”:

A while back I got an email from a reader which asked, “When are you going to write some real fantasy, y’know, with orcs?”

I have a problem with orcs. I’m orc-averse, you might say; even orcophobic. I know, I know, orcs are everywhere in fantasy; from Tolkien to Warhammer; by saying I hate orcs I invite the wrath of… well, the fannish horde. (Groan. Sorry.) But here’s something I want you to think about: what are orcs?

Seriously. In most of the fantasy works I’ve consumed, orcs are violent, mindless or less intelligent than human beings, brutal and thuggish and Always Chaotic Evil. But these are adjectives, not nouns. All mythological creatures have a real-world root. Dryads are trees + humans + magic. Mermaids are fish + humans + magic, or maybe porpoises + magic. Unicorns are deer or horses + magic, maybe with a bit of narwhal glued on. Dragons are reptiles + magic, or maybe dinosaur bones + magic – paleontology. So again: what are orcs supposed to be?

They are human bodies + bad magic – the essence of humanity, for whatever value that essence might hold: a soul, a mind, aestheticism, whatever. And therefore, in most fantasy settings in which I’ve seen orcs appear, they are fit only for one thing: to be mowed down, usually on sight and sans negotiation, by Our Heroes. Orcs are human beings who can be slaughtered without conscience or apology.

Think about that. Creatures that look like people, but aren’t really. Kinda-sorta-people, who aren’t worthy of even the most basic moral considerations, like the right to exist. Only way to deal with them is to control them utterly a la slavery, or wipe them all out.

So maybe now you can understand why I’m not very interested in writing about orcs.

Jemisin commends the serious and sincere attempts to redeem the orc as a fantasy figure, and also notes with amusement that “for awhile, “orcing” became slang for SFF fans of color getting pissed off at authors’ racefails… but there’s a reason that slang caught on, and there’s a reason it was as painful as it was funny when we used it.”  Orcs, she concludes “are fruit of the poison vine that is human fear of “the Other”.

David Brin’s earlier essay takes a similar approach.  Brin points out that the “urge to crush some demonized enemy” is old and deep, and satisfied too easily by Tolkien. Of particular concern are the orcs. Brin laments

the vicarious thrill we feel over the slaughter of orc foot soldiers at Helm’s Deep. Then again as Ents flatten even more goblin grunts at Saruman’s citadel, taking no prisoners, never sparing a thought for all the orphaned orclings and grieving widorcs. And again at Minas Tirith, and again at the Gondor Docks and again … Well, they’re only orcs, after all.

Brin, tongue firmly in cheek, calls for “empathy” for the orcs, a task that could be complicated by two facts 1) they’re supposed to be entirely alien from us, and 2) they don’t exist. The cultivation of empathy is one of the many uses of fiction, particularly when readers and viewers find themselves empathizing with characters who are, in some way or another, alien to them. [4]

Such empathy can also be problematic, in that audiences might be manipulated into empathizing with characters whose actions and values remain repellent even when the story is over, by the simple virtue of the characters being either the protagonists, the narrator, or both (see American Psycho or Dexter). But what happens when the most alien, most “othered” characters are, by virtue of plot, description, and world building, provide an unexpectedly easy platform for identification by those who are not part of the initial target audience?

Next: There and Back Again

[1] In his discussion of the paradoxes of Russian paleoconservatism, Viacheslav Morozov notes the double bind enforced by the movement’s binary framework: “By grounding its every move in the Eurocentric normative order, Russian paleoconservatism abuses and inverts the hegemonic vocabulary but makes no attempt at transcending or abandoning it.”  (Morozov, Vicheslav.  Russia’s Postcolonial Identity: A Subaltern Empire in a Eurocentric World. New York: Palgrave Macmillan, 2015

[3] See Paul B. Sturvesant’s blog post on The Public Medievalist (https://www.publicmedievalist.com/race-fantasy-genre/), as well as his recent book, The Middle Ages in Popular Imagination: Memory, Film and Medievalism (Bloomsbury 2018).

[4] Brin’s call for a more sympathetic treatment of Orcs was primarily political, but it has implicitly been answered by many within the F&SF community. Or rather, it was answered before Brin even raised the issue.   In 1999, the British writer Stan Nicholls began a series of novels where the protagonists are Orcs.  Here they Orcs are not exactly paragons of virtue, but their plight is compelling.  Humans, in bringing agriculture and industry to the Orcs’ enchanted world, have caused environmental devastation and an ever-worsening shortage of magic.  The series, which  consists of two trilogies to date, is unsurprisingly called Orcs.