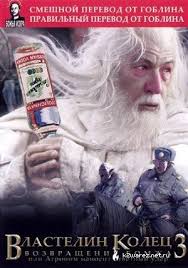 Given the obvious associations between Reagan’s “evil empire” and Star Wars, not to mention the far greater cultural weight of the Star Wars phenomenon in America before Peter Jackson’s movies came out, Western observers might be surprised to find Tolkien looming so large in internal Russian discourse about the culture’s relationship with the West.

After all, other upstart Dark Lords have made a name for themselves since Tolkien first wrote The Lord of the Rings.  Presumably, Darth Vader’s genocidal home base would have been  as powerful symbol as anything associated with Mordor, but Death Stars, like old Soviet color televisions, have an unfortunate tendency to explode.  And as for Voldemort, even He Who Must Not Be Named trembles before the might of J.K. Rowling’s legal team.

Nor can the plan to project the Eye of Sauron onto a Moscow skyscraper be patronizingly chalked up to a local culture’s  misunderstanding of an imported work of art.  If anything, The Lord of the Rings is one of those foreign classics that has so permeated the culture as to have become all but Russian.  As someone who long ago found himself reading John Galsworthy’s The Forsyte Saga and Astrid Lindgren’s Karlsson-on-the Roof to remedy embarrassing gaps in his knowledge of Russian culture, I truly believe this is not an overstatement.

Indeed, I find it difficult not to view the entire Eye of Sauron affair as a postmodernist prank. A tale of the forces of Light fighting the armies of Darkness,  The Lord of the Rings easily lends itself to allegorical readings.  Tolkien created the better part of his secondary fantasy world during World War II, allowing simple connections to be drawn between Mordor and fascism.  But, as Michael Moorcock shows in his classic takedown of British pastoral fantasy “Epic Pooh,” the implications of the triumph over evil, dark-skinned hordes by pasty-faced hobbits and porcelain-skinned Elves are disturbing.

So projecting the All-Seeing Eye of Sauron over the capital of a country that is developing a reputation for xenophobia and excessive media surveillance could seem like a rather pointed political statement.  But if we throw Gogol into the mix of our wandering body parts, perhaps the Eye of Sauron is a bit too “on the nose”?

Writing in the hard-line newspaper Sovetskaia Rossia just on December 30, 2014, Svetlana Zamlelova included the Eye of Sauron controversy in her end-of-the-year column, whose headline, “The Americans Have Announced Sanctions Against Us,” would become the title of her essay collection the following year.  After a brief reference to Reagan-era attempts to bring the “Evil Empire” to heel and listing all the anti-Russian events of 2014, she turns to the Tolkien fans’ idea for commemorating the release of Peter Jackson’s The Hobbit:

The Eye of Sauron —the main Tolkien symbol of evil–was supposed to light up over the capital.  Why Moscow and why the Eye of Sauron? We ca only guess.  And if we recall that “Putin is capable of any atrocity,” and Russia is a “Mafia Country,” that is, the epicenter of evil, then there’s no reason to be surprised.  After all, Mordor—Sauron’s country—is the same things as the “evil empire,” only updated.   The “Evil Empire” is old-fashioned, pathetic and boring.  But Mordor is dynamic, “trendy,” and young people, including Russians, understand it.  There’s even a kind of “message” to Russian youth:  if you don’t want to live in Mordor, change the system, get rid of Putin/Sauron and his butchers.

Zamlelova is not one to see light-hearted humor, let alone styob, when there is an opportunity to uncover a Russophobic conspiracy. On the contrary, she wants to make sure her readers understand that the real Eye of Mordor belongs in America.  Knowingly or not, she is situating herself in a decades-long Russian tradition of Tolkienist allegory, even if, by 2014, nationalist rereadings of Tolkien had far surpassed her own in terms of sheer ingenuity. For yeas, the most active venue for deconstructing The Lord of the Rings’ political implications has been Russia itself.

Though an official, complete Russian translation of The Lord of the Rings would only appear in 1992, numerous Russian-language manuscripts of the trilogy had been circulating in samizdat since the 1960s.  While the danger of being caught with an an unauthorized edition of The Two Towers could not reasonably be compared with the possession of, say, The Gulag Archipelago, Tolkien’s unofficial circulation certainly added to his work’s subcultural mystique.  And if The Lord of the Rings had become the model for epic fantasy in the West, its centrality would only be greater in a literary environment that was largely inhospitable to elves.

Next: The Abuses of Enchantment