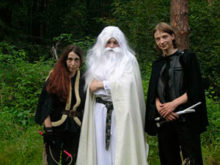 The story of Russia’s Orcs has roots both deep and shallow; deep, in that they stretch back almost to the beginning of Russian Tolkien fandom, and shallow, because Tolkien’s work arrived in the former USSR with a significant delay. Though there were nine translation of Tolkien in circulation by 2004, this was the result of  a decades-long process. [1]

Famed F&SF translator Zinaida Bobyr’ tried to get her abridged Russian version published through the Khrushchev years, with the result that three typed and bound copies of it circulated as samizdat in the mid 1960s (Markova 163-164). It would only be in the last days of Perestroika that an abridged version was published, with a full edition brought out a year after the Soviet collapse.

As a result, Tolkien’s reception in Russia is distinguished by two important features: first, in a country with a history of distrust of “subcultures,” Tolkien fans (“Толкинисты”) were greeted with suspicion by the media and the Russian Orthodox Church, with “Tolkienists” treated as yet another “foreign sect” that threatened Russian traditions.  Second, and more important for our purposes, the timing of Tokien’s Russian fame facilitated political readings of The Lord of the Rings. In a 1997 article in Nezavaisimaia gazeta, Ivan Sleptsov wrote:

The Lord of the Rings is—among other things—a political pamphlet in which Tolkien included an encoded description of the conflict of the political darkness of the East and the freedom of the West, and a prediction of the inevitable fall of Mordor and its analog on the real earth, the Soviet Union. (Sleptsov, as quoted in Markova).

More recently, on the “Law in Russia” web portal associated with the online journal Political Education (Politicheskoe obrazovanie), a user identifying himself as “Egorov” developed this idea in greater detail:

Hidden and unhidden chains of association have their effect on the subconscious.  Let’s take, for example, good old fantasy, in particular the fundamental world of Middle Earth by the great author John Tolkien.  And let’s look at it through the prison of the geopolitical circumstances at the time this work was written.  And so there are four main races: elves, humans, homes, and force.  Let us break them down according to their associations with nations in the atmosphere of the middle of the last century.  “Of course” the elves are Anglo-Saxons, a higher race, immortals who can always run back to their island if need be.  The human alliance is most of Europe at the time.  The gnomes are the residents of Belgium, Switzerland, and other mountainous areas of Europe.  What’s left are the orcs.  Here there is disagreement as to whether they are Chinese or Russian.  At times they are presented as yellow-skinned people, a direct reference to the Chinese.  At other times their skin is green.  But let’s not be racist.  After all, we also live in Asia.  But the land of the orcs was most likely the Soviet Union.  And if we take a look at our character, then we obviously fit the role of orcs.  The Russian character: simplicity, a tendency towards risk-taking and heroic deeds, an expansive soul, tenacity, group thinking.  We are directly associated with orcs not only through our character; our historic path over a great deal of time is connected with the horde, from the Tatar-Mongol Horde to the communist system.  And it’s no surprise that for the elves and the European alliance we were and remain a horde; if you like, it’s a matter of genetic memory reinforced by “authorial opinions.” Recall that this world was created on the verge of the second world war. Then Europe feared a union of Sauron and Nazgul—which one was Hitler and which one was Stalin hardly matters.   The orc army is a direct association with the Soviet army and the peoples of the Union, that was the message for lovers of John Tolkien’s work.

While such a reading is not unknown in the West, it does run into several obvious problems.  First, Tolkien himself was adamantly against political or allegorical interpretations of his work.  This, however, is not a serious objection for most literary scholars, who, for a variety of critical and theoretical reasons, dismiss the idea that a meaning’s work is equal to the author’s intent.

The more serious problem is that it is anachronistic. The Lord of the Rings was written between 1937 and 1949; if we assume that contemporary concerns could have crept into the manuscript against the author’s will, a British citizen writing during this period has a much more obvious model for the embodiment of evil than Stalin’s Soviet Union.  Thus the equation of Sauron with Hitler and his dark hordes with the Nazis seems far more likely, if still reductive, and it is a comparison that is easy to find in English-language writings about Tolkien’s trilogy.

There are specific linguistic reasons for Russian readers to find a Soviet subtext in Lord of the Rings, depending on the book’s translation.  Mark T. Hooker devotes an entire chapter to the subject in his monograph on Tolkien in Russia: “One Day in the Life of Frodo Drogovich: Stalin and Yezhov in the Shire.”  In particular, the translation of Tolkien’s trilogy by Mariia Kamenkovich and Valerii Karrik, numerous editions of which were brought out by noted F&SF publishers Azbuka and Amfora, weaves a Stalinist thread throughout the entire text.  Their annotations inform the reader that “The Scouring of the Shire”  is a parody of socialism: “Tolkien never had any doubts as to the true face of the socialist utopia, which Lotho Sackville-Baggins tries to introduce into the Shire” (Kamenkovich and Karrik, as cited by Hooker). [2]

This is an interpretation that is much easier to dismiss thousands of miles from Moscow, with the self-satisfied assurance that comes from reading Tolkien in its more or less native, quasi-Anglo-Saxon linguistic and cultural milieu.  But we should not be so quick to discount the “Russia as Mordor” idea, if only because Russian culture during the Perestroika years and the decades that followed cannot be understood without the creative anachronism that came with the return of both Western and pre-Revolutionary culture after the removal of censorship.

Freud, Spengler, Weininger , Lombroso, Fyodorov, and Platonov were all contemporaries of the last Soviet generation and its children, taking on a relevance that they might arguably lack without Russia’s twentieth-century experience of rupture and return.  Why, then, shouldn’t Tolkien be equally timeless?

[1] Most of my information about Tolkien’s translation and circulation in the Soviet Union comes from Mark T. Hooker’s exhaustive study, Tolkien Through Russian Eyes.

[2] Hooker also shows how fraught certain English terms were when rendered into Russian, and not just by Kamenkovich and Karrik.  Depending on the translation, the term “Chief” in Return of the King  ends up as “Generalissimo”, “Boss” (“Начальник”), “Предводитель” and “Правитель.”  Vladimir Murav’ev made the obvious, but daring choice rejected by all the other translators:   “‘Вождь’ [Vozhd’] , a word that cannot be dissociated from Stalin.