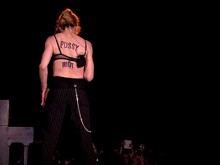 When Mitt Romney declared Russia the “number 1 geopolitical foe” during the recent US presidential campaign, he would have been on much firmer ground had he simply added “of Madonna and Lady Gaga.”  Granted, Romney would have been an unlikely proponent of a pro-diva plank in the Republican platform, but he would at least have shown that he’s been paying attention.  A number of public figures and institutions in the Russian Federation are desperate for a culture war, and here I have in mind not the familiar xenophobes raging against dark-complectioned interlopers; today’s public enemies are blonde on blonde.

Madonna, as you might recall, dared to express her support not only of Pussy Riot, but of gays and lesbians after the adoption of a St. Petersburg law against the “propaganda of homosexuality.”  The law’s author, Parliamentarian Vitaly Milonov, longs for the days of yore, when lesbianism was unthinkable, and the only options for gay men were the closet, prison, or marriage to Alla Pugacheva.   In the wake of Madonna’s recent concert in St. Petersburg (the sole venue where she has managed to be scandalous in years), St. Petersburg parliamentarian Vitaly Milonov is issuing frantic warnings about the dire consequences of an upcoming performance by Lady Gaga.  Throw in Beyonce and Katy Perry and we have the Four Horse-Divas of the Apocalypse.

Culture wars make for dubious political strategy.  A liberal politician can gain down-home credibility by attacking the occasional outrageous performer (as in Bill Clinton’s Sister Souljah moment), but conservatives run the risk of isolating themselves from consumers of mass entertainment (otherwise known as “the majority.”) In postsocialist Russia, going on the offense against decadent pop culture is not exactly new, but these latest incidents represent a break with the tacit concordat of Putinism:  if the public stays out of politics and doesn’t complain about the state-dominated news media, the government handles the entertainment industry with kid gloves.  Both the Yeltsin and the Putin governments appeared to realize that close oversight of popular culture was a losing proposition.  Perhaps now that the opposition has adopted the methods of art (Pussy Riot, Voina, the Blue Noses) and entertainment (everything from satirical Internet memes to Ksenia Sobchak’s anti-Medvedev rap number), the line is harder to draw.

Certainly, Russian hard-liners have reason to feel let down by Western pop performers.  Putin himself, a lifelong Beatles fan, seemed a bit hurt by Paul McCartney’s disapproval of the Pussy Riot trial. But the Beatles gave us all good advice more than four decades ago: let it be.