Tara Wheelwright is a PhD candidate in Slavic Studies at Brown University currently completing a dissertation on Soviet ballet.

Above: Dozhd TV ironically broadcasting Swan Lake during its final hours on the air in March 2022. Source

On February 28, 2022, I was standing in my kitchen in Moscow. As a Fulbright recipient, I had just been advised to pack my belongings immediately and prepare to cross the border to Finland within 24 hours. In an attempt to remain calm, my husband and I dropped off our kids at what would be their last day of school and took the long route home, our nerves on edge. We basked in an unusually sunny day, all while our phones buzzed with news alerts and we passed bank after bank filled with people withdrawing stacks of bills.

I switched on the TV to listen to the news while I fished long-lost Lego pieces from every conceivable crevice of the apartment, but there was no broadcast. In what felt like a hallucination of history repeating itself, what appeared onscreen were black-and-white scenes from the Soviet ballet production of Sergei Prokofiev’s Cinderella [Золушка].

As a PhD candidate working on a dissertation on Soviet ballet, I found the choice to show ballet on a news channel as Russia invaded Ukraine to be the absurdist linchpin in an increasingly horrifying situation. Though there were multiple news channels on cable TV and only one was showing Soviet ballet, I found it hard to believe that any channel, any program, any person could knowingly broadcast old Soviet ballet footage without seeing the historical parallels.

In the Soviet Union, state-controlled television would put Pyotr Tchaikovsky’s Swan Lake on repeat whenever a momentous event occurred in order to buy the authorities time to come up with a plan. Ballet was deployed following the deaths of Leonid Brezhnev in 1982, Yuri Andropov in 1984, Konstantin Chernenko in 1985, and, perhaps most famously, following the failed coup against Mikhail Gorbachev in 1991. As Janice Ross puts it, successive Soviet regimes used ballet “to block the dissemination of real information and to soothe the masses through the use of squadrons of ‘tutus.’” In 2022, thirty-odd years after Soviet collapse, this same strategy was being revived.

Cinderella had premiered in 1945 at Moscow’s Bolshoi Theater. By the second performance, the titular role was being danced by the great Galina Ulanova, personally selected and transferred by Stalin from the Kirov in Leningrad to the Bolshoi in Moscow for the purpose. At her new artistic residence, she immediately received the title of prima ballerina assoluta. The ballet itself was a thinly veiled morality tale about the virtuous but downtrodden Cinderella emerging victorious over the evil stepmother—a direct allusion to the war. 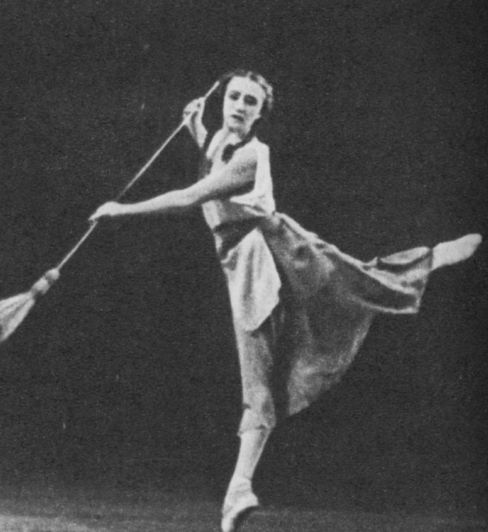 Above: Galina Ulanova in Cinderella, 1945

Ulanova was known not only as a dancer, but also as a model Soviet citizen. Offstage, she dressed modestly in suits in muted colors and carried herself in a down-to-earth manner. Her image appeared in magazines, postcards, and, later, film and television across the Soviet Union. She wrote books and articles on the virtues of the Soviet system and its benefits to ballet and art in general. For her performance in Cinderella, Ulanova was awarded her second Stalin Prize.

Cinderella may have been on the broadcast schedule all along, with no connection to the events that had occurred on February 24, 2022. Yet on a day when the news was silent about why the stock market had failed to open, and as protests were unfolding in major cities across Russia, watching ballet on TV felt profoundly dissonant. Walking around Moscow without ever looking at Western media or social media sites, it was possible to come to the conclusion that all was normal—even beautiful, considering the mild weather and sunlight. One glance at the Internet, of course, dispelled that impression immediately.

Beneath its apparently anodyne surface, Cinderella is a profoundly political work. Its content, carefully curated to respond to the ideological needs of a wartime public, set Ulanova on par with war heroes for her contributions to the Soviet Union. Stylistically, too, Cinderella reflected the political mores of its time, being an exemplar of Socialist Realism. As of 1934, all Soviet art, including ballet, was called upon to produce works that would help transform the Soviet state into the ideal Communist society. Already in the early 1930s, drama-ballets [drambalety] based on canonical Russian literature had predominated, capitalizing on public familiarity with authors like Pushkin, Gogol, and Lermontov to ensure that the ballets’ ideological messaging would be easily understood. After 1934, ballets began to use foreign canonical works, most notably Romeo and Juliet and Cinderella, which were intended to dazzle a broader, more international public with Soviet mastery of Western classics.

In the present, televised ballet continues to be used for straightforwardly ideological purposes, as it was on February 28, but is also subject to ironic re-appropriation—as was the case with Dozhd TV, Russia’s last independent news channel, which broadcast Swan Lake during its final hours on the air. Cinderella‘s appearance on my own television screen hardly seemed coincidental. Perhaps my particular research interests caused me to exaggerate the importance of this episode; yet there is no denying that, on that day, Soviet-era entertainment replaced informational coverage that might otherwise have reached viewers.

Ulanova, who captured audiences throughout the Soviet Union and then the world as Juliet, Cinderella, Maria from Pushkin’s Fountain of Bakhchisarai, among other roles, modeled a commitment to art and ideology in equal measure. Today, Russian performers wishing to retain their status must pay similar fealty to the reigning ideology, whether they remain at home or live abroad. Public figures perceived as avoiding forthright speech only arouse public ire, as was the case with internationally renowned opera singer Anna Netrebko. Ballet dancers, too, must decide whether to keep their positions at the cost of their silence, or to speak out against the war and leave—as did Olga Smirnova, an acclaimed principal from the Bolshoi.

The war has forced companies and individuals alike to take a political stance: witness the departure from Russia of brands like McDonalds, Ikea, and Coursera. Art forms like ballet are no exception—making the February 28 broadcasting of Cinderella, even if we ignore its Soviet-era baggage, an inherently political act.