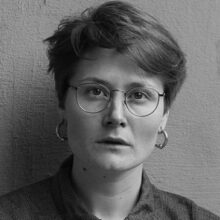 Scout Mills is a doctoral student in the Department of Slavic Languages at Columbia University and holds an M.A. in Russian & Slavic Studies from NYU.

In an interview with Radio France Internationale, Oksana Vasyakina argued that “there is no violence more sophisticated than that which exists close to us.” In this same interview, Vasyakina notes that she was writing her book Wind of Fury during the online flashmob “I am not afraid to speak” (#янебоюсьсказать). She realized that her readiness to speak on the issue of sexual violence coincided with a time when other women felt similarly ready to speak “because it was no longer possible to endure.”

The political power of a literary piece like Vasyakina’s Wind of Fury lies in its indisputable reliance on the personal. By rendering a fantasy of violent revenge as part of a political movement, Vasyakina prioritizes personal coping mechanisms over concrete action. She creates a fantasy of a nation of women by using violence to forge what Benedict Anderson called “imagined community” — one based on subjectivity. Vasyakina’s poetry consumes rapists and abusers in order to further the narrative of the abused, rather than rejecting or even forgiving them: “no one will touch us now / those who reached their hands towards us have stuck to our body and move with us / those who looked at us with lust have dissolved in our black blood.”

It is a cliché of nationalist propaganda, and even less inflammatory senses of nationhood, to personify the nation as a woman. Propaganda posters have long depicted nationalist anxiety as women being raped by the ethnic or political “other.” Oksana Vasyakina’s poetry is a cathartic project that reproduces violence in order to heal from it, using violent language to communicate with its perpetrators. Wind of Fury also reimagines the equivalence of nation with woman. Her bloody reframing of a common trope repossesses the violence inflicted upon women by emphasizing that its perpetrators are not “others.”

Vasyakina’s poetry makes violence intimate, giving the reader the sense of something lurking constantly in a woman’s life, ready to strike at any moment and thus becoming familiar. The nation as woman becomes a nation of women. Rather than depicting a traumatized nation full of wounded and vulnerable rape victims, Vasyakina creates a nation of women ready to fight: “You say that beyond the horizon there might be something for us / And for other women like us.”

To speak about trauma in a cathartic way, Vasyakina focuses on reconnecting body and mind, reclaiming the body to recognize the physical reality of suffering. Lines like “they couldn’t make a sound but howled howled howled / about the loss of their body” and “we are covered in a crust / of blood and sperm” present two contrasting images of trauma. The former acknowledges the loss of connection with body, while the latter forcefully reclaims the body through graphic details of its material existence. A recurring motif in Wind of Fury revolves around the earth as the ultimate collective body. Nature is as cruel and unforgiving as it is vital to growth and rebirth: “We smell of body and earth / we drag a trail of blood behind us / blood on the grass it means we’re alive.” Here, we see a clear allusion to Earth as a mother capable of nurturing injured women, though at the same time there is “the loss of self under the earth.” The Earth functions both as a symbol of nurturing care (“It dissolved in the rootless gray earth / the earth dissolved in their bodies / the earth eased their pain”) and of burial. This paradoxical symbolism illustrates the pain of rebirth.

The brutalized women Vasyakina features in her poetry are connected to the Earth as though to a mother, reborn from it after being buried within it. Vasyakina relies on the violence of an abused woman’s narrative to remind the reader that her subject lives not in spite of violence, but because of it. Her very existence has been shaped by being symbolically murdered and buried, only to grow from the experience and become a warrior. We can relate this back to the idea of the nation: Vasyakina’s “womanly tribe” is born of a cruel world but reclaims the earth that buried it. Vasyakina builds her narrative on reclaiming, on radical acceptance of pain and suffering that creates a new tribe of women connected to nature rather than to civilization: “only the earth can bear our body.”  Vasyakina’s earth is covered in blood, trauma coloring her narrative to the point that she must rediscover language through violence.

Wind of Fury is an attempt to put words to the transformation of victim into survivor without erasing victimhood. Vasyakina uses violence to tell her story and thus finds a language that perpetrators of violence can understand: “and there is no language / to describe the fury / it sleeps like a tired animal / in their hearts.” The loss of connection between mind and body also appears in the form of a loss of connection to language as a means of representation. Vasyakina uses a fantastical image of revenge as a means of reclaiming the blood — both metaphorical and non- — that women lose to acts of violence: “up to the vagina our legs are red / with the blood of rapists / they won’t be able to hide from the blood.” These lines reframe the act of rape as an act of violence distant from sex. They presume that rapists “hide from the blood” by ignoring the pain they inflict on their victims. Yet Vasyakina’s fantasy uses the rapists’ own blood as a means of drawing attention to the violence of the act.

Vasyakina’s collective body (“our bodies weave together into one cruel black body”) is a nation of Amazons bound not by their subservience, but by their shared experiences and choice to create their own nation. By using the language of violence to reclaim and reframe rape narratives, Vasyakina effectively rewrites it. At a time when more women are encouraged to speak up about trauma, sexual assault, and sexual harassment, Vasyakina’s work seems deeply necessary. Vasyakina doesn’t speak — she screams, forcing readers to face violence head-on rather than presenting them with measured speech and curated narration.