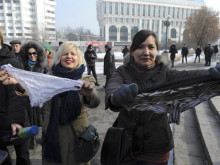 If there is one topic that is all over the Russiasphere news right now, it is underpants. Ladies’ underpants. As a long time admirer of underpants, I may say that I am quite disappointed in the Duma’s acceptance of the law which came into effect this month. From July 1st, 2014, the inner layer of underwear, it seems this mostly affects ladies underwear, may not be manufactured from synthetic material. In all of the Customs Union. That means no more lacy underpants, (popularly understood as a ban on anything but granny panties) in Russia, Belarus and, perhaps most tragically, Kazakhstan.

But the ban is not only a matter of production, but also prohibits the sales and the “transport” of synthetic panties. So, technically, a young woman (is this sentence ageist?) could not purchase synthetic underwear in Europe on vacation and come back to Russia. This is akin to the old trick of trying on underwear in the fitting rooms and strutting out the store.

Nor could she wear her old synthetic underwear on the plane to Italy, and keeping in the spirit of her host country not even remove it for a whole week (when in Rome!), and later reenter the Fatherland. Many hope you can de facto smuggle in at least one pair of underwear while wearing it.

Furthermore, natural underwear is supposed to be specially marked. Since not all underwear is manufactured with this special marking (because production is outside of the Customs Union’s jurisdiction), wearing European underpants could be a request for a search and confiscation at the airport. In related news, the applications for customs officers increased 45000 % the day this law came into effect.

The real problem here is that natural materials are very expensive, especially if we are weaving an intricate pattern, a picture of a politician, or an ironic “Please, no flash photography”-like phrase. The democratic synthetics used to make your average g-strings lie within financial reach of the lowliest pelmeni twister. Chinese-made Spiderman logo underpants is one thing, but this could negatively impact many lingerie outlets and factories all across the Customs Union as the common folk revert to the old standards.

This is a fine example of the troubles of owning a business in Russia. You may be good at what you do and, who knows, even pay your taxes, but there is no guarantee that the power that be will not decide one day that the thing you sell must meet impossible specifications. Even something as innocuous as a G-string is no longer a safe product.

A series of such bans has recently come into effect in Russia. Smoking has been banned indoors and bad words have been banned in public media and performances (that means movies). The Duma is also considering laws which would ban skirts above the knee, but even the Russian MPs knows such a prohibition would instigate riots in the street. A stipulation against mini-skirts just seems like it couldn’t stick, but we’ll see how this whole non-smoking thing goes. Many bars have been introducing nicotine-free tobacco for their hookah pipes, and heated out-door smoking areas in order to comply with the new rules.

Why? Yes. Why ban synthetic panties? Some say that synthetic panties are like bad for your “sensitive” areas or whatever, but I propose it is for the very same reason NASA decided to blow up in the moon in this Mr. Show sketch.

The reaction to this law has been minimal, including a feeling that it is not being enforced. There was in fact a protest in Kazakhstan, but that went mostly unnoticed by Western media for some reason. Western media likes to take these kinds of rules and make fun them. Well. go ahead, make fun from your soft nylon pedestals, the rest of us will take a page from the book of Mahatma Gandhi and start sewing ourselves.