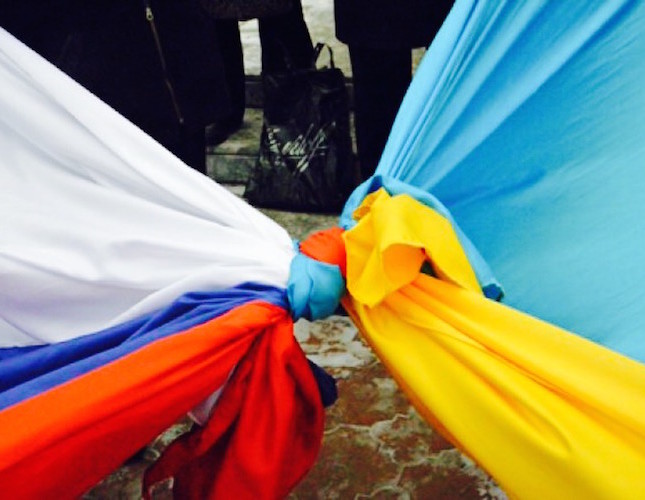 On May 4, 2016, please join us for a panel discussion entitled “Beyond Political Games,” dedicated to the Russian-Ukrainian conflict from the historic and cultural point of view. Panelists included Yanni Kotsonis, Director of the Jordan Center for the Advanced Study of Russia at NYU, Lucan Way, Associate Professor of Political Science at the University of Toronto, and Peter Zalmayev, Director of the Eurasia Democracy Initiative.

Yanni Kotsonis is the founding Director of the Jordan Center for the Advanced Study of Russia at NYU. He was educated in Athens, Montreal, Copenhagen, London, Moscow, and New York. He taught in England before coming to NYU in 1994. He pursues his interest in modern Russia through political economy, which he expressed in his first books on agrarian change and his recent book of taxation in Russia, the USSR, and Europe. In his teaching too he is concerned with the ways we can make intelligent comparisons between one time period and another (Imperial and Soviet Russia), and one country and another (Russia and other parts of Europe). His studies of taxation and his introduction to the book Russian Modernity reflect these interests. So does the range of courses he teaches and the variety of topics researched by his PhD students: Siberia, Harbin, Soviet Roma, Mozambique, and political Utopianism. He works with only a few students at a time; as someone once said, “Better fewer, but better.”

Lucan Way is an Associate Professor of Political Science at the University of Toronto. His research focuses on democratic transitions and the evolution of authoritarian rule in the former Soviet Union and in cross-regional perspective. His book, Pluralism by Default: Weak Autocrats and the Rise of Competitive Politics, is forthcoming with Johns Hopkins University Press. He is also known for his work on hybrid or competitive authoritarian rule.  His book, Competitive Authoritarianism: Hybrid Regimes after the Cold War (with Steven Levitsky), was published in 2010 by Cambridge University Press. He has also published articles in Comparative Politics, Journal of Democracy, Perspectives on Politics, Politics & Society, Slavic Review, Studies in Comparative and International Development, World Politics, as well as in a number of area studies journals and edited volumes. He is currently working on a book that explores why certain autocracies – such as the USSR, Cuba, Iran, North Korea – have been so durable in the face of extreme outside pressure. The Durability of Revolutionary Regimes (with Steven Levitsky) examines the ways in which origins in violent revolutionary struggle generate robust authoritarian institutions.  Professor Way is on the Editorial Board of Journal of Democracy.

Peter Zalmayev is Director of the Eurasia Democracy Initiative (EDI), an international non-profit organization dedicated to the promotion of democracy and human rights in post-Communist transitional societies of Eastern and Central Europe, the Caucasus and Central Asia. Zalmayev received his Master’s in International Affairs from Columbia University’s School of International and Public Affairs with a concentration in post-Soviet/Eurasian studies. From 2000-2006, he managed the Central Asia/Caucasus Program at major international human rights watchdog, the International League for Human Rights. Zalmayev is a 2013 graduate of the International Peace Academy’s (now the International Peace Institute) Seminar “The Regionalization of Conflict and Intervention.” He has provided regular commentary to major U.S. and international print and broadcast media on political, social and economic developments in countries of the former Soviet Union. In 2011, Zalmayev joined the board of the American Jewish Committee, New York Region. In June-July 2014, he appeared in leading Ukrainian broadcast media, including the country’s main political talk show, Shuster LIVE, where he urged Ukraine’s government to devise a broad international media campaign to help Ukraine in the face of Moscow’s aggression. Zalmayev also gave interviews on Hromadske TV, VESTI Radio, and the 1+1 channel.  Peter has been a frequent commentator on Ukraine CNN Int’l, BBC World News and Al Jazeera/English and Arabic, and also contribute op-eds to Al Jazeera’s website.

This event is co-sponsored by the NYU Russian Club.