A History of the “Soviet” with Anna Krylova 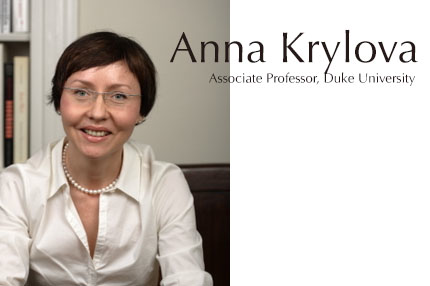 A Discussion with Anna Krylova

A History of the “Soviet”: The Lingua Franca of Soviet Modernity

“A History of the Soviet: The Lingua Franca of Soviet Modernity” explores a longstanding convention, in and outside academia, that has allowed scholars to conflate in their work such basic cultural categories of modern Russian history as “Soviet,” “Marxist,” “Bolshevik,” “collectivist,” and “proletarian.”  One unsettling implication of the state of the field explored in the paper is that the defining term in modern Russian history, impossible to avoid, the “Soviet,” remains historically unsignified. Defined through the complex adaptation of previous Marxist/Bolshevik intellectual trends and used interchangeably with them, the “Soviet” and all its multiple derivatives – the Soviet person, the Soviet culture, etc. — tend to thwart the understanding of a distinct historical phenomenon marked by substantive cultural differentiation. The second part of the paper explores the rise of the Soviet lingua franca in the mid 1930s as a cultural phenomenon distinct from the Soviet state’s founding Marxist/Bolsheivk ideology and as a reaction to social and generational changes of the period, the changes that defined the rest of the Soviet century.

Anna Krylova is Associate Professor of Modern Russian History at Duke University.  She specializes in intellectual, cultural, and gender history of modern Russia. Her interests also include questions of historical interpretation and gender theory. She has published widely on the cultural and intellectual history of Soviet and post-Soviet Russia, rethinking the history of building socialism in the age of globalization.  She is the author of Soviet Women in Combat: A History of Violence on the Eastern Front (Cambridge University Press, 2010) which won the 2011 Herbert Baxter Adams Prize of the American Historical Association.  The book is an exploration of historical and theoretical ways of conceptualizing heterosexual subjectivity, sexual difference, and gender forms other than along opposition-bound imperatives.  Her work has appeared in Journal of Modern History, Slavic Review, and Kritika: Explorations in Russian and Eurasian History.  This semester, she is a Member at the Institute for Advanced Study, Princeton.