Alexandra Petrova on migrations, Rome and her Appendix 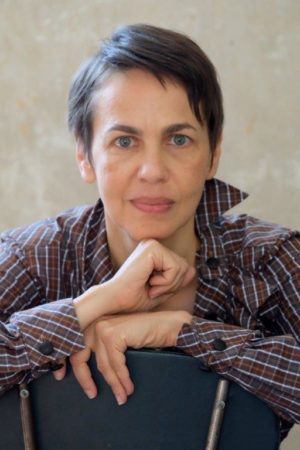 Please join us on Monday, February 12th for “The Quadratura of Myth; or Thirty White Piglets on the Road of Fate”, a talk by Alexandra Petrova on migrations, Rome and her Appendix.

Rome-based Russian-language poet and prose writer Alexandra Petrova discusses her recent novel, Appendix, which explores the ins and outs of migration / immigration / emigre existence against the background of the Eternal City — her adopted home and that of millions of immigrants stretching from yesterday’s Libyan refugees to luminaries of the ancient world.

Alexandra Petrova was born in St. Petersburg when it still was called Leningrad. She studied Russian language and literature at the University of Tartu (where she attende Yuri Lotman’s seminar on 19th century literature), writing a thesis on the prose of Leonid Dobychin. In 1993 she immigrated to Jerusalem, where she studied art history at Hebrew University. Since 1998 she has lived in Rome.

She is the author of three volumes of poetry: Point of Detachment [Liniia otryva] (1994), Permit to Live [Vid na zhitel’stvo], with an introduction by Alexandr Goldshtejn (1999) and Only the Trees [Tolko derevia], with an introduction by Stephanie Sandler (2008).  She has also published Dolly’s Shepherds [Pastukhi Dolly] a philosophical operetta in ten acts (2001). In 2016 she published a novel, Appendix. She has written essays on contemporary art and literary criticism, translated from Italian poetry for magazines and the philosopher Paolo Virno’s Grammatica della moltitudine. Per una analisi delle forme di vita contemporanee (2003).

Her works have appeared in leading Russian literary journals, such as Znamia, Zerkalo, Zvezda, NLO, as well as in many anthologies and took part in many International festivals of literature. She was short-listed for the Andrei Bely Prize for poetry in 1999 and 2008, and in 2016  she won it in the prose category for Appendix (also short-listed for the NOS Prize and included in the long-list for the Bolshaja kniga, Russkaja Premia and Alexandr Piatigorsky Prizes).

Petrova’s prose and poems have been the subject of much critical attention and have been translated into several languages.