Analyzing Russia and the Changing Ideas Industry: Addressing the Decline of Regional Expertise in Academic and the Policy World 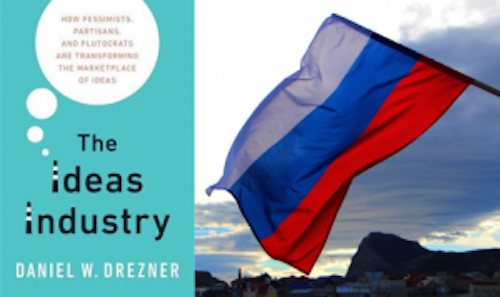 Please join the Harriman Institute and New York University’s Jordan Center for the Advanced Study of Russia for a panel discussion with Daniel Drezner (Professor of International Politics, The Fletcher School, Tufts University) about his new book, The Ideas Industry: How Pessimists, Partisans, and Plutocrats are Transforming the Marketplace of Ideas (Oxford University Press, 2017) and how it might relate to trends in the (de)valuing of Russian-regional expertise.

For years, observers have lamented the declining role of academic expertise about Russia and Eurasia in the shaping of US public policy. But as Daniel Drezner has argued in his impactful new book The Ideas Industry, broader changes in American public life—including political polarization, a distorted market of ideas and distrust in public institutions—have eroded the authority of traditional sources of foreign policy expertise. In this panel we will explore how the current crisis in US-Russia relations has further magnified the shortage of US-based regional expertise. After presenting his book, distinguished Russia experts from academia and the think tank community will discuss Drezner’s arguments and assess the future role of regional knowledge in a globalized world and rapidly changing intellectual environment.

Support for this event was provided by a grant from the Carnegie Corporation of New York.