Anonymous Was a Russian Woman at the Bar of Penance: Written Confessions ca. 1888-1908 (with Nadieszda Kizenko and Discussant Hilde Hoogenboom) 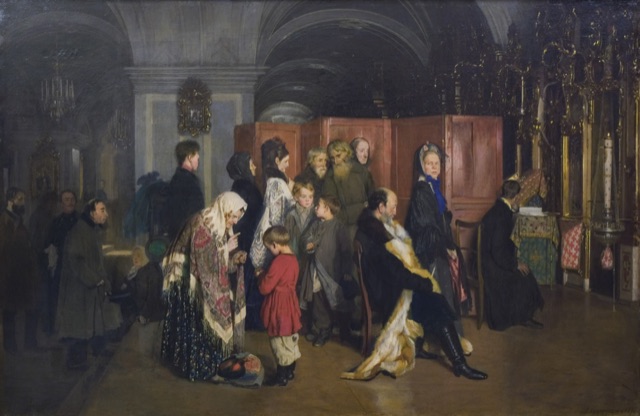 Join us for another installment of the 19v seminar series!

If there were ever a group that might be described as the silent majority, it is the barely literate women who went to confession in the Russian empire. Although Orthodox Christians of both sexes and all ages above seven were required to do this at least once a year, women in Russia (as elsewhere in Europe) tended to go more often than men.

In theory the sacrament of penance was auricular and private. However—unusually—women in the Russian empire also produced both written confessions and other texts relating to confession. Unlike male Russian writers, who described govienie (the entire process of preparing for confession and communion) in other ways—Pushkin and Ogarev’s satirical verse, Natasha Rostova in War and Peace, Stavrogin in Besy—women turned the experience of confession into a form of mostly private literary production rather than public declamation or social critique. Their texts include written confessions, examinations of conscience, texts aimed at children preparing for the all-important first confession, and representations of confession in works of fiction.

Most Russian women tended to approach their confession-related written production in an ‘auxiliary’ spirit, as preparation for a spoken confession. Because of this, some of their texts were original, some followed templates produced by the Russian Orthodox Church, and some were copied extracts from devotional classics. All of them raise complicated issues of originality, quotation, authorship, and narrative voice (encountered by such later Russian-language women writers as Sof’ia Fedorchenko or Svetlana Aleksievich). This talk will examine several confessions written to the charismatic Father John of Kronstadt, possible templates, and literary representations.

Participants can access preliminary materials in advance of the event.