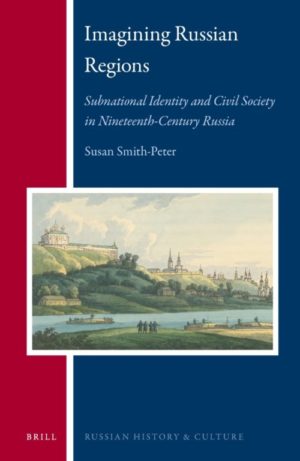 On Friday, April 6th please join us for “Imagining Russian Regions: Subnational Identity and Civil Society in Nineteenth-Century Russia”, a book talk with Susan Smith-Peter (CUNY Staten Island). This talk is part of the Occasional Series, sponsored by the Jordan Center for the Advanced Study of Russia.

In Imagining Russian Regions: Subnational Identity and Civil Society in Nineteenth-Century Russia, Susan Smith-Peter shows how ideas of civil society encouraged the growth of subnational identity in Russia before 1861. Adam Smith and G.W.F. Hegel’s ideas of civil society influenced Russians and the resulting plans to stimulate the growth of civil society also formed subnational identities. It challenges the view of the provinces as empty space held by Nikolai Gogol, who rejected the new non-noble provincial identity and welcomed a noble-only district identity. By 1861, these non-noble and noble publics would come together to form a multi-estate provincial civil society whose promise was not fulfilled due to the decision of the government to keep the peasant estate institutionally separate.

Susan Smith-Peter is an associate professor at the College of Staten Island/ City University of New York.  She works on Russian history beyond the two capitals of Moscow and St. Petersburg.  Beginning with a study of identity in the provinces of European (or central) Russia, she has branched out to investigate the regional identity of the Russian North and Siberia as well.  She has published widely on topics related to civil society and regional identity.