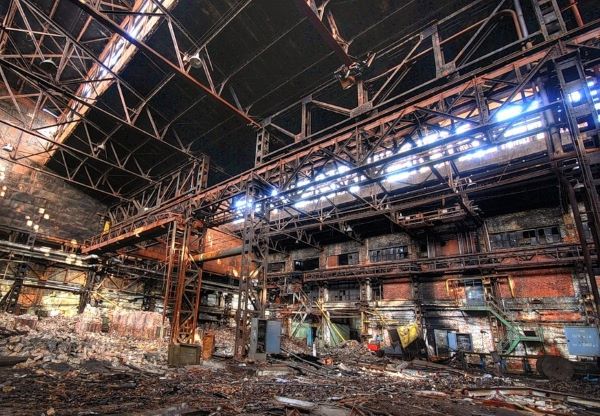 On Wednesday April 24th, please join us for  “Post-Soviet, Post-Industrial, Post-Future: Rethinking Space After the End of Communism”, a talk by Daria Ezerova of Davidson College. This event is part of the Occasional Series and is sponsored by the Jordan Center for the Advanced Study of Russia.

In 1989, the writer Viktor Erofeev pronounced Soviet literature dead. Two years later it was the Soviet Union itself that had met its demise. But the art and ideology of the former regime, closely intertwined, would haunt Russia from beyond the grave. Daria’s work charts the “afterlife” in architecture, literature, and cinema of the Socialist vision of progress toward a utopian future. In this talk, she take a closer look at representations of industrial space after the collapse of the USSR in order to expose their unexpected appropriation of the aesthetics of Socialism. Using two cases studies – one from the immediate post-Soviet period and another from the mid-2000s – , Daria suggests that Russian culture registers its reaction to present hopes for the future through representations that draw upon the past, notably in relation to the rise of Vladimir Putin’s style of politics, which has come to stamp its mark on contemporary Russia. A novel and film that depict industrial space thus serve as a springboard for broader questions about the Russian post-Communist experience, and whether indeed one can speak of a singular experience or multiple.

Daria would especially welcome questions from anyone interested in how political regimes shape our sense of time and space in post-Soviet or comparative perspectives.

Daria Ezerova specializes in twentieth-century and contemporary Russian culture and society, with a specific focus on spatial theory, ideology, and Putin-era literature and cinema. Her current book project, entitled Derelict Futures: The Spaces of Socialism in Contemporary Russian Literature and Film, examines how political power shaped the representation of space and time after the collapse of the Soviet Union. She earned her PhD in Slavic Languages and Literatures from Yale University, and completed her B.A. in American Studies and Translation Studies at Moscow State University. She is currently a Visiting Assistant Professor of Russian Studies at Davidson College, where she teaches courses on Putin’s Russia and Cinema After Communism. She is also the President of the ASEEES Working Group on Cinema and Television.