Period zapoya: Alcohol and Cinema during the Brezhnev Era 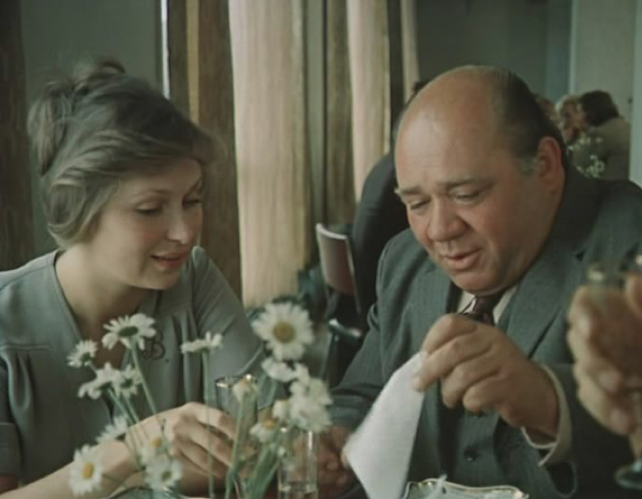 The Jordan Center’s Colloquium Series serves to introduce the most recent work of scholars within the Slavic field. Participants come from universities across the country and abroad, and work in disciplines ranging from history, political science and anthropology to literature and film. The colloquium discussion is based on a working paper which will be circulated prior to the event. In this session of the Spring 2016 Colloquium Series, Catriona Kelly will join us from the University of Oxford to speak on “Period zapoya: Alcohol and Cinema during the Brezhnev Era.”

“We really don’t want any drinking scenes in this comedy of ours,” Lev Varustin, then Editor-in-Chief of Lenfil’m, the Leningrad film studio, commented in 1978 after a showing of Viktor Tregubovich’s  Ukhodya-ukhodi [Get a Move On, 1978]. “Yes, I know that the State Committee [on Cinema] won’t let you show people drinking,” Tregubovich replied. “But a holiday’s a holiday, a party’s a party, and looking for bottles on the screen and then chopping them out – that really is throwing out the baby with the bathwater.” In fact, bottles of booze (specially filled with tinted water by the factories supplying them) figured fairly widely in films of the period, despite the Decree of the Council of Ministers (May 5, 1972) which launched a nationwide campaign against “drunkenness and alcoholism”. This paper, based on work for a history of Lenfil’m between 1961 and 1985, examines how the 1970s campaign against alcohol could actually be a stimulus to the representation of drinking, providing this was shown to be a social evil (see, for instance, Dinara Asanova’s Beda [Catastrophe, 1977]). Alongside this, presenting content as “anti-alcohol” could act as legitimation for social criticism of a broader kind, as in Vitaly Mel’nikov’s Otpusk v sentyabre [Time Off in September, 1979]. Kelly will argue that the production of films involved much more than a simple contest between creative inspiration and political censorship; films were actually made in a complex process that eyewitnesses refer to as “cherez preodolenie” [transcendence/getting by]. This process involved struggle with shortages and technical deficiencies, problems in getting agreement to location shoots, and management issues such as heavy demand on popular actors, not to speak of workplace drinking, as well as arguments over “filtration”. Added to this, the commitment to realism on the part of directors, though not necessarily to “Socialist Realism” (a term that almost never figures in internal discussions) was universal, yet it was precisely here where the biggest conflicts with the authorities lay. In this sense, cinema, widely perceived in the post-Soviet era as a state-sponsored and hence “tame” art form, could share the overall stance of the underground culture of the period – which the bohemian atmosphere during film-making, especially on location, also recalled.

Catriona Kelly is Professor of Russian at the University of Oxford and Fellow of the British Academy. In 2015, she was the first President of the Association for Slavic, East European, and Eurasian Studies to come from outside the US. Her many publications on Russian culture include Comrade Pavlik, the Rise and Fall of a Soviet Boy Hero (Granta Books 2005, Russian translation 2009), Children’s World: Growing up in Russia, 1890-1991 x (Yale UP, 2007), awarded the Grace Abbott Book Prize of the Society for the History of Children and Youth, and St Petersburg: Shadows of the Past (Yale UP, 2014), shortlisted for the Pushkin Prize. She has now begun working on The Soviet Cine-Underground, a history of film in Leningrad during the post-Stalin era.

This event is co-sponsored by Tisch School of the Arts