From Triumph to Crisis: Neoliberal Economic Reform in Postcommunist Countries 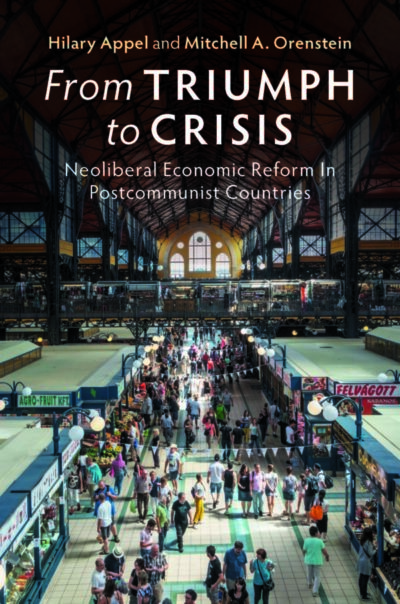 On Friday, September 7th please join us for a book talk with Hilary Appel (Claremont McKenna College) and Mitchell A. Orenstein (University of Pennsylvania) on From Triumph to Crisis: Neoliberal Economic Reform in Postcommunist Countries.

Hilary Appel and Mitchell Orenstein will present their new book entitled From Triumph to Crisis: Neoliberal Economic Reform in Postcommunist Countries (Cambridge University Press 2018), which accounts for the unexpected evolution of postcommunist economic transition. Only in retrospect has it become clear that postcommunist countries were among the most fervent and committed adopters of neoliberal economic reforms throughout the world. Not only did they manage to overcome the anticipated domestic opposition to mass privatization, shock therapy, and Washington Consensus reforms, but many countries, including Russia, adopted avant-garde neoliberal reforms like the flat tax and pension privatization. Neoliberalism in the postcommunist countries went farther than expected and lasted longer. Given the failure of existing theories to predict these outcomes, this book presents a new theory based not on domestic political-economic struggles, but on the imperatives of re-insertion into the international economy. The authors argue that countries engaged in “competitive signaling,” enacting many reforms in order to attract foreign investment. This signaling process explains the endurance and intensification of neoliberal reform for nearly two decades between 1989-2008 and its decline after 2008, when inflows of capital into the region suddenly dried up and when the appeal of more statist and nationalist economic models became more widely appealing.

Hilary Appel is the Podlich Family Professor of Government and George R. Roberts Fellow at Claremont McKenna College. Appel’s research examines the politics behind post-Communist economic reforms, policies of retrospective justice, and issues of identity and politics in the post-Communist world. In addition to publishing multiple books, she has authored articles in leading scholarly journals like World Politics, Comparative Politics, Comparative Political Studies, Review of International Political Economy, Post-Soviet Affairs, East European Politics and Societies, and others. She has been awarded national fellowships from the Social Science Research Council, American Council of Learned Societies, Fulbright Foundation, National Council for Eurasian and East European Research, Kennan Institute, Harriman Institute, and the Institute for the Study of World Politics.

Mitchell A Orenstein is Professor and Chair of Russian and East European Studies at the University of Pennsylvania.  His research focuses on the political economy and foreign policy of post-Communist states. He is the author of multiple books, including two prize-winning books, Out of the Red: Building Capitalism and Democracy in Postcommunist Europe (2001) and Privatizing Pensions: The Transnational Campaign for Social Security Reform (2008) as well as numerous articles appearing in Comparative Politics, Comparative Political Studies, Governance, Journal of Democracy, and Foreign Affairs. He has consulted for the World Bank and the Ministry of Privatization of the Slovak Republic.