Geography of Anti-Corruption Protests in Russia 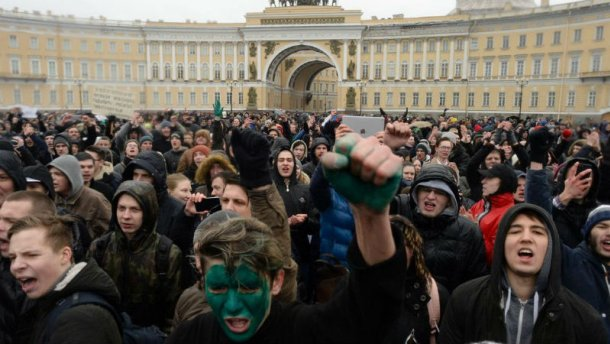 Please join us on Wednesday, October 3rd for “Geography of Anti-Corruption Protests in Russia”, a talk with Olena Nikolayenko, Fordham University. This event is part of the Occasional Series, sponsored by the NYU Jordan Center for the Advanced Study of Russia.

On 26 March 2017 thousands of people in nearly one hundred Russian cities participated in anti-corruption protests. This episode of contention was triggered by the opposition politician Alexei Navalny’s release of aYouTube video clip, exposing the Prime Minister Dmitry Medvedev’s extravagant lifestyle and opaque business deals. It was one of the largest protests since post-election mass mobilization in the winter of 2011. Nonetheless, the level of citizens’ participation in the anti-corruption rallies varied across the country. As many as 4,000 people gathered near the monument to Vladimir Vysotsky in Novosibirsk, Russia’s third largest city situated in Siberia. In contrast, approximately 300 people, making up almost one percent of the city’s population, joined the protest in Kaluga, located less than 200 kilometers away from Moscow. Using this case of mass mobilization against corruption, the study examines a spatial dispersion of protest behavior in contemporary Russia.

Olena Nikolayenko is Associate Professor and Associate Chair for Undergraduate Studies in the Department of Political Science at Fordham University. She is also an Associate at the Davis Center for Russian and Eurasian Studies, Harvard University. Nikolayenko received her Ph.D. in political science from the University of Toronto and held visiting appointments at the Center on Democracy, Development, and the Rule of Law, Stanford University; the Princeton Institute for International and Regional Studies, Princeton University; and the Department of Sociology, the National University of Kyiv–Mohyla Academy, Ukraine. Her research interests include comparative democratization, social movements, political behavior, women’s activism, and youth, with a regional focus on Eastern Europe, Russia, and Central Asia. Her recent book, Youth Movements and Elections in Eastern Europe (Cambridge University Press 2017) examined tactical interactions between nonviolent youth movements and incumbent governments in Azerbaijan, Belarus, Georgia, Serbia, and Ukraine.