A Lecture and Q&A with Vladimir Kozlov: Russian Cultural Underground, from late 1980s to now 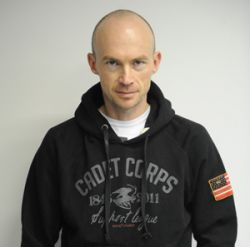 Please join us on Thursday, April 11th for a lecture and Q&A with Vladimir Kozlov entitled, “Russian Cultural Underground, from late 1980s to now”. This event is part of the Occasional series and is sponsored by the Jordan Center for the Advanced Study of  Russia.

Vladimir Kozlov is a Russian writer and filmmaker, surveys the intriguing landscape on the late-Soviet and post-Soviet underground culture, from Siberian punk rock to Pussy Riot.

Vladimir Kozlov was born in 1972 in Mogilev, in Belarus. His coming-of-age years coincided with the collapse of the Soviet Union and attending pains of the birth of new social, political and economic order. Kozlov is the author of several books of fiction and non-fiction; several books received critical acclaim and were long-listed for prestigious literary awards. His books “USSR : Diary of a Perestroika Kid” and “1987” have been translated into English, as was a number of short stories which appeared in literary journals and anthologies. Kozlov also made a documentary “Traces on the Snow”, on the seminal Siberian punk rock movement of the 1980s. Kozlov’s most recent project is a video blog “The Underground is Dead”, possibly a riff on Boris Grebenshchikov’s classic “Rock’n’Roll is Dead; I am though, not quite yet”.