The Legacy of Liberation: Soviet Power and Socialist Friendship in Cold War Czechoslovakia 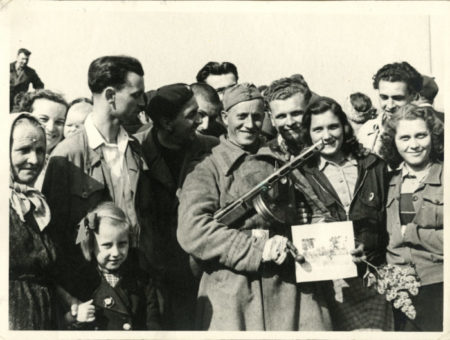 On Friday, March 23rd please join us for “The Legacy of Liberation: Soviet Power and Socialist Friendship in Cold War Czechoslovakia”, a talk with Rachel Applebaum of Tufts University. This talk is part of the Occasional Series, sponsored by the NYU Jordan Center for the Advanced Study of Russia.

During the Cold War, the Soviet Union and its satellite state, Czechoslovakia, were entwined in a far-reaching “friendship,” which shaped the most intimate aspects of the everyday lives of citizens in both countries. The Soviet Army’s liberation of Czechoslovakia from German occupation at the end of World War II provided the basis for this friendship. This talk will examine how the legacy of the liberation evolved over the course of the postwar period, from Stalinism to de-Stalinization, and from the Prague Spring to the collapse of socialism. For four and a half decades, the legacy of the liberation influenced the broader friendship between the two countries, and was in turn shaped by it. In particular, I will discuss the impact of the liberation’s legacy on war memorials and commemorations; film and mass media; and relations between Soviet veterans and the Czechoslovak civilians they encountered in 1944–45.

Rachel Applebaum is Assistant Professor of Russian and East European history at Tufts University. Her first book, Empire of Friends: Soviet Power and Socialist Internationalism in Cold War Czechoslovakia, is under contract with Cornell University Press, and will be published in spring 2019. She has published articles related to her research for this project in The Socialist Sixties: Crossing Borders in the Second World (Indiana, 2013) and in Slavic Review (Fall 2015). Rachel has recently begun a second book project on the development of Russian as a world language during the Cold War. She received a short-term fellowship from the Jordan Center supporting research for this project in October 2017.