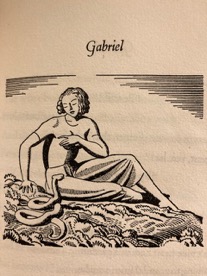 In this talk, Professor Ilya Vinitsky, with discussant Maxim Hanukai, will focus on aesthetic and ideological implications of the first translation of the “Gabrieliad” (Гавриилиада, 1821) into English (and, for that matter, into any foreign language) by Max Eastman (1883-1969). Eastman was an American poet, novelist, essayist, socialist, feminist, friend of John Reed, and editor of left-wing modernist magazines The Masses and The Liberator. He was also Leon Trotsky’s biographer, translator, and unofficial literary agent, introducing Western readers to Lenin’s so-called “Testament.”

Why did a nineteenth-century frivolous poem turn out to be such a magnetic text for Eastman, as well as for the cohort of other Western translators? Professor Vinitsky argues that the paradox of the “Gabrieliad” is that this bawdy and blasphemous work has been read in the West as a poetic manifesto of free love and the emancipation of women, appealing to author-translators with corresponding ideological agendas—and life experiences. The subjective narrative model in the poem (humorous digressions, recollections, calls to “off-screen” addressees, the poetics of a biographical riddle) offered translators (and their muses and co-authors) an invitation to personalize the text in different historical and cultural periods.