Picturing the Russian/Soviet Empire: Ilia Repin’s “Reception of the Volost Elders by Alexander III” (1886) and its Afterlife in Stalin’s Kremlin (with Nikita Balagurov and Discussant Christine Ruane) 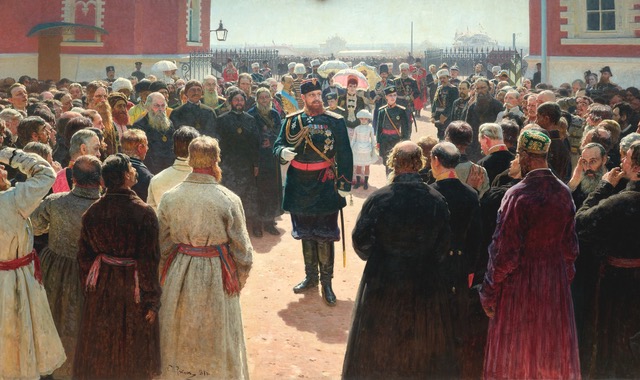 In 1887, Ilia Repin oversaw the installation of his massive royal painting in the antechamber of the Grand Kremlin Palace in Moscow. “The Reception of Volost Elders” (now at the State Tretyakov Gallery) portrays one of the key events in the celebrations of Alexander III’s ascension to the throne in 1883—his address to the representatives of the peasantry at the coronation dinner. This talk offers a new reading of Repin’s painting based on the investigation of contemporary nationalist and colonialist discourse in the artist’s treatment of the scene. Previously untapped sources have allowed us to identify many of the ethnically and religiously diverse participants depicted in this canvas and have revealed the logic behind their placement in the composition. In his painting, Repin reflects what Frederiсk Cooper and Ann Stoler have called the “tensions of empire.” Just as Russia’s dominant approach to dealing with those tensions was to rule through difference, Repin also followed a differentiating approach to rendering non-Russian minorities in the scene. The case of the “Reception of the Volost Elders” thus provides an opportunity to look at the ways in which different imperial narratives took shape under the brush of a renowned realist painter. At the same time, it also shows how the artist’s brushwork can act as a means of artistic empowerment, reversing the center-periphery model of imperial representation. The talk also refutes the predominant assumption that this painting fell into oblivion after the Bolsheviks removed it from the Kremlin. New evidence suggests instead that “The Reception of the Volost Elders” not only reclaimed its prominent position in the 1930s, but also played a crucial role both in Stalinist ceremony and in Stalin’s iconography of power.

This event will be held as a Zoom meeting.