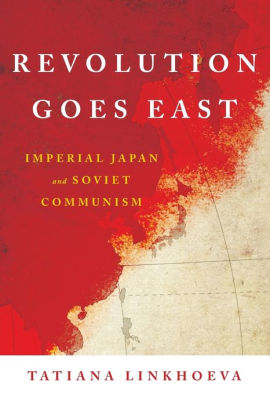 Revolution Goes East is an intellectual history that applies a novel global perspective to the classic story of the rise of communism and the various reactions it provoked in Imperial Japan. Tatiana Linkhoeva demonstrates how contemporary discussions of the Russian Revolution, its containment, and the issue of imperialism played a fundamental role in shaping Japan’s imperial society and state.

In this bold approach, Linkhoeva explores attitudes toward the Soviet Union and the communist movement among the Japanese military and politicians, as well as interwar leftist and rightist intellectuals and activists. Her book draws on extensive research in both published and archival documents, including memoirs, newspaper and journal articles, political pamphlets, and Comintern archives. Revolution Goes East presents us with a compelling argument that the interwar Japanese Left replicated the Orientalist outlook of Marxism-Leninism in its relationship with the rest of Asia, and that this proved to be its undoing. Furthermore, Linkhoeva shows that Japanese imperial anticommunism was based on geopolitical interests for the stability of the empire rather than on fear of communist ideology.

Dr. Tatiana Linkhoeva is Assistant Professor of Japanese History at New York University. Native of the republic of Buriatia (Russia), Dr. Linkhoeva graduated from Moscow State University, received her MA from the University of Tokyo, and PhD in History from UC Berkeley. She has been awarded fellowships from Japan’s Ministry of Education, the Japan Foundation, UC Berkeley, and the German Excellence Initiative.

This event is being hosted and co-sponsored by the NYU Center for the Humanities. Please RSVP on Eventbrite, or access the Zoom webinar from this link.