Russia Hosts the World Cup: Sports and Politics in 2018 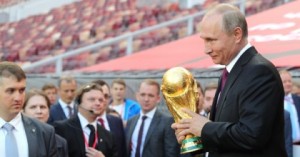 Please join the Harriman Institute and New York University’s Jordan Center for the Advanced Study of Russia for a panel discussion on “Russia Hosts the World Cup: Sports and Politics in 2018”, featuring panelists Jane Buchanan (Associate Director, Europe & Central Asia Division, Human Rights Watch), Natalie Koch (Associate Professor of Geography, Syracuse University), and Gabriele Marcotti (ESPN Senior Writer and Times Columnist). This event is part of the New York Russia Public Policy Seminar, co-sponsored by The Harriman Institute of Columbia University and the New York University Jordan Center for the Advanced Study of Russia. The joint initiative, supported by the Carnegie Corporation of New York, establishes a regular forum for academics and professionals in New York city to engage with pressing issues informing U.S.-Russia relations. The sessions seek to bring innovative and impactful scholarship and analysis to bear on key trends and related policy questions and to create an informed network for open dialogue and debate.

From June 14 to July 15, 2018, the Russian Federation will host the 21st FIFA World Cup finals, the most watched global sporting event. In the wake of the International Olympic Committee’s recent decision to ban Russia from the 2018 Winter Olympics in Pyeongchang, South Korea, the FIFA World Cup offers Moscow the opportunity to regain the global spotlight and rebrand itself. Our panel, consisting of leading academics, activists and sports journalists will consider the relationship between global sporting events, their world governing bodies and local political agendas, and will identify the trends, themes and tensions that will drive international media coverage of the tournament: How should sports journalists manage the balance between covering a sporting event and delving into the political controversies that may surround its staging? What were the particular lessons learned by international activists from their efforts to use the 2014 Sochi Olympics as an campaign opportunity?  And, in general, how should we understand and evaluate the impact of a global sporting spectacle on the political agenda of a host country’s governing regime?

Jane Buchanan is Associate Director of the Europe and Central Asia Division at Human Rights Watch. Since 2005, she has conducted research and advocacy on human rights issues in Russia and other countries of the former Soviet Union, including on police violence, media freedom, property rights, disability rights, and children’s rights. She has led Human Rights Watch’s work on abuses linked to on mega events in the former Soviet Union, including the 2012 Eurovision Song Contest in Azerbaijan, the 2014 Sochi Winter Olympics, and Russia’s 2018 World Cup. Before joining Human Rights Watch, Buchanan served as the executive director of the Russian Justice Initiative in Moscow. She holds a master’s degree in international affairs and economics from Johns Hopkins University and graduated summa cum laude from Bowdoin College.

Natalie Koch is Associate Professor and O’Hanley Faculty Scholar in the Department of Geography at Syracuse University’s Maxwell School of Citizenship and Public Affairs. She is a political geographer focused on geopolitics, nationalism, and authoritarianism in the post-Soviet space and the Arabian Peninsula. Dr. Koch is particularly interested in alternative sites of geopolitical analysis such as sport, spectacle, urban planning, and other allegedly positive expressions of authoritarian state power. She has written extensively on the geopolitics of sport, including articles in Political Geography, Studies in Ethnicity and Nationalism, and Eurasian Geography and Economics, and she is the editor of Critical geographies of sport: Space, power, and sport in global perspective (Routledge, 2017), and author of the forthcoming book, The geopolitics of spectacle: Space, synecdoche, and the new capitals of Asia (Cornell University Press, 2018).

Gabriele Marcotti is a Senior Writer at ESPN, a columnist for The Times of London and the author of four books. Russia 2018 will be his sixth World Cup and he has written extensively about soccer and culture over a twenty year career. He holds a BA from the University of Pennsylvania and and an MS from the School of Journalism at Columbia University. He lives in London.

Note: Venue is in the middle of the Columbia University Campus between Broadway and Amsterdam, north of College Walk. See map for more details: http://www.columbia.edu/files/columbia/content/morningsidemap_2015aug.pdf