Russia Without Putin Money, Power and the Myths of the New Cold War- A Book Talk with Tony Wood 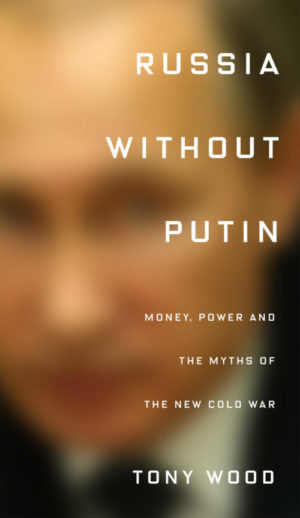 On Tuesday, December 11th please join us for “Russia Without Putin Money, Power and the Myths of the New Cold War- A Book Talk with Tony Wood”.

It is impossible to think of Russia today without thinking of Vladimir Putin. More than any other major national leader, he personifies his country in the eyes of the world, and dominates Western media coverage. In Russia itself, he is likewise the centre of attention both for his supporters and his detractors. But, as Tony Wood argues, this focus on Russia’s president gets in the way of any real understanding of the country. The West needs to shake off its obsession with Putin and look beyond the Kremlin walls.

In this timely and provocative analysis, Wood explores the profound changes Russia has undergone since 1991. In the process, he challenges several common assumptions made about contemporary Russia. Against the idea that Putin represents a return to Soviet authoritarianism, Wood argues that his rule should be seen as a continuation of Yeltsin’s in the 1990s. The core features of Putinism — a predatory elite presiding over a vastly unequal society — are in fact integral to the system set in place after the fall of Communism.

Wood also overturns the standard view of Russia’s foreign policy, identifying the fundamental loss of power and influence that has underpinned recent clashes with the West. Russia without Putin concludes by assessing the current regime’s prospects, and looks ahead to what the future may hold for the country as a whole.

Tony Wood is in the PhD program in Latin American History at NYU. He is previously the author of Chechnya: The Case for Independence (2007), and his writing has appeared in the London Review of Books, The Guardian, n+1 and The Nation, among other places.