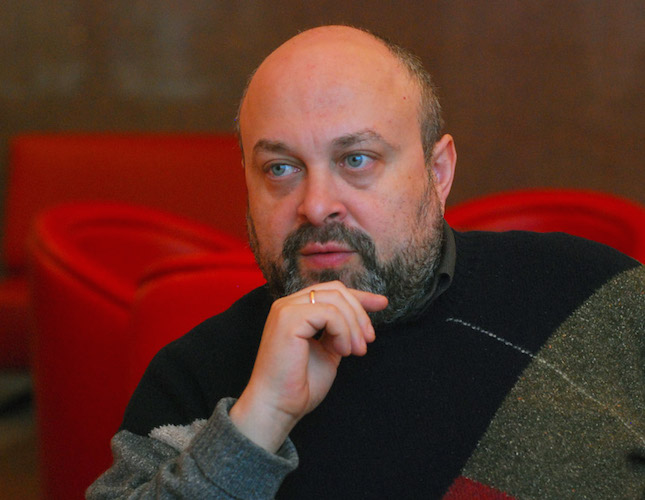 On April 15, 2016 please join us for “Soviet Cold War Imagination,” a lecture by Evgeny Dobrenko from University of Sheffield.

Similarly to how Soviet art was a reflection and extrapolation of ideological fantasies onto everyday Soviet life, Soviet Cold War culture created the Other who was actually the most adequate image of the Self, a projection and displacement of creator’s image. This art was thoroughly mimetic as it reflected better than anything else the Soviet traumas, complexes, anxieties, phobias, and real political aspiration of the regime. This paper will concentrate on Soviet public discourse, journalism, poetry, and film during most important formative Stalinist years of the Cold War.

Dobrenko is Professor and Head of Department of Russian and Slavonic Studies, University of Sheffield. His research interests lie in Soviet and post-Soviet literature and culture, Socialist Realism, Soviet national literatures, Russian and Soviet film, critical theory and Soviet cultural history. He is the author, editor and co-editor of twenty books, including Russian literature since 1991 (2015), A History of Russian Literary Theory and Criticism: The Soviet Age and Beyond (2011), The Cambridge Companion to Twentieth-Century Russian Literature (2011), Noncanonical Classic: Dmitry Aleksandrovich Prigov (2010), Petrified Utopia: Happiness Soviet Style (2009), Museum of the Revolution: Stalinist Cinema and the Production of History (2008), Political Economy of Socialist Realism (2007), Soviet Culture and Power A History in Documents, 1917-1953 (2007), Aesthetics of Alienation: Reassessment of Early Soviet Cultural Theories (2005), The Landscape of Stalinism: The Art and Ideology of Soviet Space (2003), Soviet Riches: Essays on Culture, Literature and Film (2002), The Making of the State Writer: Social and Aesthetic Origins of Soviet Literary Culture (2001), Socialist Realist Canon (2000), Endquote: Sots-Art Literature and Soviet Grand Style (1999), The Making of the State Reader: Social and Aesthetic Contexts of the Reception of Soviet Literature (1997), Socialist Realism without Shores (1997), Metaphor of Power: Literature of the Stalin Era in Historical Context (1993), and more than 300 articles and essays which have been translated into ten languages. Dobrenko worked in the Soviet Union (Odessa State University, Moscow State University, the Russian State University for the Humanities, Moscow), in the USA (Duke University, Stanford University, Amherst College, University of California), and in the UK at the University of Nottingham. He held a Stanford Humanities Centre Fellowship, a Karl Loewenstein Fellowship in Political Science and Jurisprudence at Amherst College, and a Kennan Institute of the Woodrow Wilson International Centre Fellowship. He was a Fellow at the New York University International Centre for Advanced Studies and at the Centre for Research in the Arts, Social Sciences and Humanities at the University of Cambridge. He has also been a recipient of the Leverhulme Major Research Fellowship, British Academy and AHRC research grants, the Guggenheim Fellowship, the EURIAS Senior Fellowship, and in 2012 he was awarded the Efim Etkind Prize for the best book about Russian Culture.