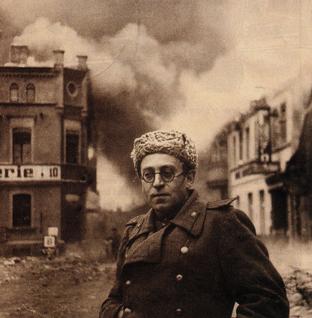 THIS EVENT HAS BEEN CANCELLED DUE TO THE SNOW STORM! Please email jordan.russia.center@nyu.edu with any questions.

On Wednesday, March 21st please join us for “The Soviet Moral Gray Zone: From Kantian Deontology to Maternal Ethics in Vassily Grossman’s Everything Flows”, a talk with Ani Kokobobo from the University of Kansas. This talk is part of the Occasional Series, sponsored by the NYU Jordan Center for the Advanced Study of Russia.

In this presentation, I consider the ethical philosophy that appears in the writings of Soviet and Jewish writer, Vassily Grossman.  Grossman spent over a thousand days as special correspondent for the Red Army on the frontlines of World War II and witnessed an inordinate amount of violence. One of the first to arrive at the site of the Treblinka Nazi extermination camp in September 1944, he composed a searing account of Nazi atrocity, “The Hell of Treblinka” (in the Soviet journal Znamia, 1944), which was later used at the Nuremberg Crime Tribunal. He then went on to turn his critical eye to the Soviet regime in novels like Life and Fate and his final opus, Everything Flows.  Beginning with his documentary essay about the Holocaust, “The Hell of Treblinka,” and continuing with his last novel about the abuses of the Soviet state, Everything Flows, I trace the evolution in ethical perspective across Grossman’s oeuvre. As I argue, in the time lapse between the two works, Grossman’s ethical code goes from a proper Kantian deontological morality, to something closer to Primo Levi’s “gray zone.” Grossman embraces the gray zone, conceiving its moral ambiguity not as ethical breakdown, but rather as the foundation for a new maternal ethics of compassion and rehumanization.

Ani Kokobobo received her BA from Dartmouth (2005) and PhD from Columbia University (2011). She is currently Assistant Professor and Director of Graduate Studies in the Slavic Department at the University of Kansas. Beginning in 2018, she will also be editor of the Tolstoy Studies Journal. ​She has published an edited volume, Russian Writers and the Fin de Siecle — The Twilight of Realism (Cambridge University Press, 2015), as well as a special issue of the Tolstoy Studies Journal: Anna Karenina in the 21st Century. She has a monograph forthcoming in 2018 Russian Grotesque Realism: The Great Reforms and Gentry Decline (Ohio State University Press), as well as another edited volume, Beyond Moscow: Reading Russia’s Regional Identities and Initiatives (Routledge). She has published over 20 academic articles and her writing for the public has appeared in The Washington Post, Salon.com, The New Republic, Business Insider, and Los Angeles Review of Books.