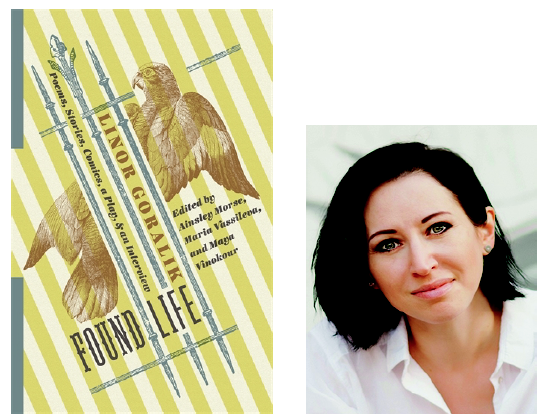 Please join us on Tuesday, February 13th for a conversation with Linor Goralik on Found Life, her recent volume in translation.

One of the first Russian writers to make a name for herself on the Internet, Linor Goralik writes conversational short works that conjure the absurd in all its forms, reflecting post-Soviet life and daily universals. Her mastery of the minimal, including a wide range of experiments in different forms of micro-prose, is on full display in the newly published collection Found Life, her first to appear in English. Goralik will read stories and poems from Found Life and will be joined in conversation by Maya Vinokour, of NYU’s Department of Russian and Slavic Studies, who co-edited / translated the book.

Linor Goralik is a writer, poet and artist living between Israel and Russia. She has authored a number of novels, short prose and poetry collections, non-fiction works, and children’s books. In addition to writing fiction, she translates prose and poetry from Hebrew and English and teaches costume theory at the State University for the Humanities and the Higher School of Economics, both in Moscow. She will be joined by Maya Vinokour of NYU’s Department of Russian and Slavic Studies to discuss the collected volume Found Life, which Vinokour co-edited. Featuring selections of Goralik’s short prose, poetry, dramas, and comic strips, Found Life is the first English-language collection to exhibit the author’s full literary range, showing her to be a keen observer of relationships at every scale — from interpersonal to international.

Linor Goralik is an award-winning contemporary Russian writer of flash fiction, poetry, essays, fairy tales, theater, and more. Found Life is her first book to appear in English. Goralik’s tour is co-sponsored by the Joseph Brodsky Fellowship Fund, of which she was a poetry fellow in 2016.

Maya Vinokour is a Faculty Fellow in the Department of Russian and Slavic Studies at New York University.