Tango with Cows: Russian Futurism and Bourgeois Culture on the Eve of World War I 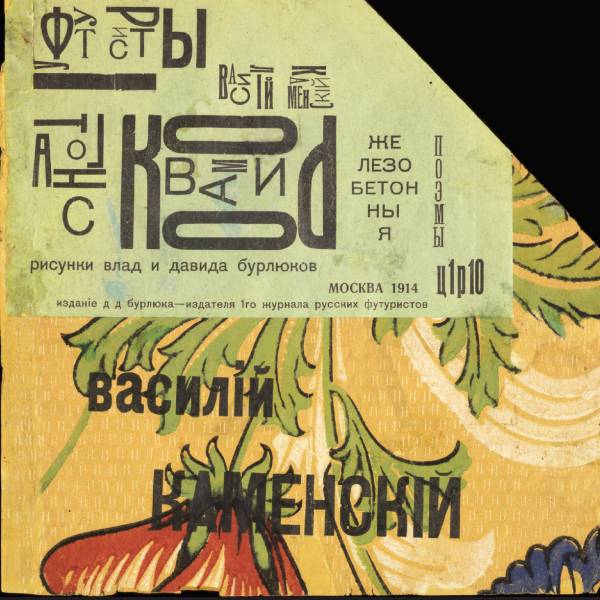 Please join us on October 30, 2015 for the launch of the English-language edition of Vasily Kamensky’s “Tango with Cows,” curated by Eugene Ostashevsky and Daniel Mellis.

Tango with Cows, a book of Russian Futurist visual poetry, was published in the spring of 1914, at roughly the same time as the Zang Tumb Tumb of F.T. Marinetti and the first calligrammes of Guillaume Apollinaire. The Petersburg avant-garde writer Kamensky became the first European poet to train as an airplane pilot until crashing his Blériot XI during a show flight returned him to literature. As third partner of the Russian Futurist tour of 1913-1914 with Vladimir Mayakovsky and David Burliuk, Kamensky eagerly innovated in the fields of book art and visual poetry, printing his typographical experiments on brashly colored wallpaper. Composed at the height of the Russian tango craze, Tango with Cows provides us pictures of Moscow’s nightlife circa January 1914—the movies, the circus, the skating rinks, the modernist art gallery, the after-hours clubs, and, last but not least, the public baths—as it reminisces about the author’s flying over Warsaw and sailing to Constantinople. Ostashevsky and Mellis’s typographic translations of Kamensky, winners of the PEN/Heim Translation Fund grant, are being issued to celebrate the hundredth—or rather the hundred-and-first-and-a-halfth–anniversary of the original Russian publication.

Eugene Ostashevsky is a Russian-American poet and translator who teaches in the Liberal Studies program. As the author of two books and ten chapbooks of poetry, most notably The Life and Opinions of DJ Spinoza, he has appeared in Best American Poetry, and received awards in the US as well as the Berliner Künstlerprogramm fellowship from DAAD. His writing is characterized by multilingual punning, humor puerile and set-theoretical, philosophical depth and narratological handicaps. As scholar and translator of Russian twentieth-century and contemporary poetry, he has received the National Translation Award, the Best Translated Book Award, the NEA, and other translation prizes. He has had his librettos for contemporary classical music performed in Italy, Germany, and the Netherlands.

Daniel Mellis makes artist’s books and other text based artworks on such topics as the poetry of philosophy, the phenomenology of space, the built environment, and the law. Experimental letterpress and offset printing underpins much of his work. His work has been shown internationally, including at the Gagosian Gallery in New York, and is in many collections nationwide. He received his MFA from Columbia College Chicago and has degrees in Mathematics from the University of Chicago and the Massachusetts Institute of Technology.