Roundtable Discussion on ‘Crossing Borders: Modernity, Ideology, and Culture in Russia and the Soviet Union’, a book by Michael David-Fox 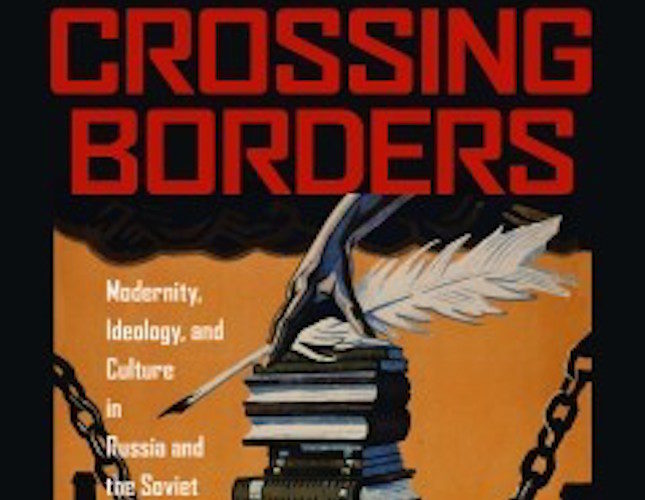 Crossing Borders: Modernity, Ideology, and Culture in Russia and the Soviet Union deconstructs contemporary theories of Soviet history from the revolution through the Stalin period, and offers new interpretations based on a transnational perspective. To Michael David-Fox, Soviet history was shaped by interactions across its borders. By reexamining conceptions of modernity, ideology, and cultural transformation, he challenges the polarizing camps of Soviet exceptionalism and shared modernity and instead strives for a theoretical and empirical middle ground as the basis for a creative and richly textured analysis.

Michael David-Fox is Professor in the Edmund A. Walsh School of Foreign Service and the Department of History at Georgetown University and Scholarly Advisor (Nauchnyi rukovoditel’) at the Center for the History and Sociology of the Second World War and its Consequences at the Higher School of Economics in Moscow. He is author of Revolution of the Mind: Higher Learning among the Bolsheviks, 1918-1929 (Cornell, 1997); Showcasing the Great Experiment: Cultural Diplomacy and Western Visitors to Soviet Russia, 1921-1941 (Oxford, 2011, paperback and Russian translation (Vitriny velikogo eksperimenta: Sovetskaia kul’turnaia diplomatiia i ee zapadnye gosti, 2014, Chinese translation 2016); Crossing Borders: Modernity, Ideology, and Culture in Soviet Russia (Pittsburgh, 2015), and nine edited volumes on a variety of topics on political, cultural, and transnational history, most recently The Soviet Gulag: Evidence, Interpretation, and Comparison (Pittsburgh University Press, in press, release scheduled November 2016). After completing his A.B. in History and Russian Studies at Princeton and his Ph.D. in History at Yale, David-Fox taught at the University of Maryland, College Park, where he was Director of Central European, Russian and Eurasian Studies. He is a Founding and Executive Editor of the scholarly journal Kritika: Explorations in Russian and Eurasian History, for which he was awarded the 2010 Distinguished Editor Award from the Council of Editors of Learned Journals. David-Fox has been a Humboldt Fellow in Berlin, a visiting professor at EHESS in Paris, a Davis Fellow at Princeton, a Fellow of the Swedish Collegium for Advanced Study in Uppsala, a Research Scholar at the Kennan Institute for Advanced Russian Studies, and a Fellow at the Mandel Center for Advanced Holocaust Studies at the U.S. Memorial Holocaust Museum. He is currently working on a book project entitled “Smolensk under Nazi and Soviet Rule.”

Rossen Djagalov is an Assistant Professor of Russian and Slavic Studies at New York University. After completing his BA in Russian and Astrophysics at Williams and his Ph.D. in Comparative Literature at Yale, Djagalov went on to become a lecturer at Harvard’s History and Literature Program, a Penn Humanities Forum postdoctoral fellow, and an Assistant Professor in Comparative Literature at Koç University, Istanbul. Djagov’s area of research is focused on post-Soviet culture, Second-world modernity and Soviet-Third World literary and cinematic engagements, media history of international leftist culture, and Marxism.

Mary (Molly) Nolan is a Professor of History at New York University. She holds a PhD and an MA from Columbia University and a BA from Smith College. Nolan’s research interests are 20th-century global economic history, the history of transatlantic relations, and memory and history. Her books include The Transatlantic Century: Europe and America, 1890-2010; Visions of Modernity: American Business and the Modernization of Germany; and Crimes of War: Guilt and Denial in the Twentieth Century. Nolan has received many accolades for her work, including the Louis Beer Prize for International History and the Helmut Schmidt Prize for German-American Economic History.

Tarik Cyril Amar is an Associate Professor of History at Columbia University. He holds a PhD from Princeton University, a M.Sc. from the London School of Economics and Political Science, and a BA from Balliol College at Oxford. Amar’s research is currently focused on a transnational history of Cold War narratives and representations of spying, secrecy, and multiple identities. He is the author of The Paradox of Ukrainian Lviv: A Borderland between Nazis, Stalinists, and Nationalists (Cornell University Press, 2015), which reveals the local and transnational forces behind the twentieth-century transformation of one of East Central Europe’s most important multiethnic borderland cities.