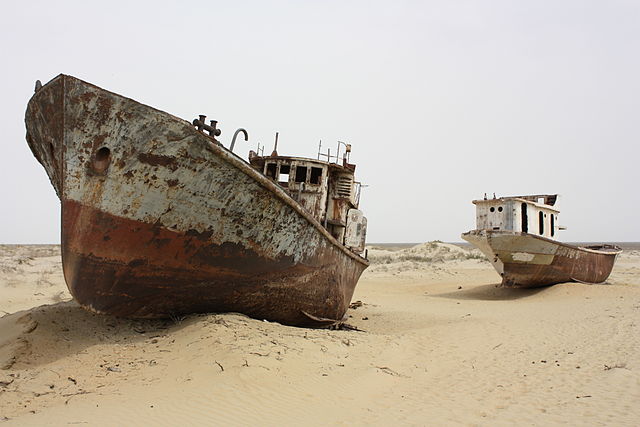 Once one of the world’s largest inland bodies of water, Central Asia’s Aral Sea began to shrink dramatically in the late 1960s, when Soviet officials directed an increasing volume of water towards cotton production. As a result of the declining water levels, the climate and ecology of the surrounding region changed.  People who lived near the sea began to experience a dramatic increase in health problems and the sea’s once vibrant fishing industry collapsed. After the Soviet collapse, international agencies, including the World Bank and the United Nations, intervened. Today, water levels have been partially restored on the Kazakh side, while the Uzbek side has continued its decline.

The case of the Aral Sea is often painted as a uniquely Soviet story, a warning about the deleterious effects of socialism on the environment. The partial restoration of water levels on the Kazakh side after the construction of a World Bank-sponsored dam in 2005, meanwhile, has been celebrated as a feat of international intervention.  This talk will challenge this narrative, showing the ways that many states and international actors played a role in the making of the catastrophe.  It will also integrate the stories of nomads, fishermen and others to illustrate how the people who lived near the sea adapted to these momentous environmental shifts.

Sarah Cameron is Associate Professor of History at the University of Maryland, College Park.  She is the author of The Hungry Steppe: Famine, Violence, and the Making of Soviet Kazakhstan (Cornell University Press, 2018), which examines one of the most heinous crimes of the Stalinist regime, the Kazakh famine of the 1930s.  The book won numerous awards in the United States. It also provoked intense discussion in Kazakhstan where the famine remains a largely forbidden topic, in part due to Kazakhstan’s close relationship with Russia.  The book, which was released in Russian and Kazakh translation, was the top selling history title in Kazakhstan in 2020. At present, Dr. Cameron is at work on a new-book length project, from which this talk draws, examining the transformation of Central Asia’s Aral Sea and its environs over the course of the twentieth century.  She received her PhD in history from Yale University.