The Sanatorium Movement, the Union of Towns and the Envisioning of Post-War Russia, 1914-1917 (with Yoshiro Ikeda) 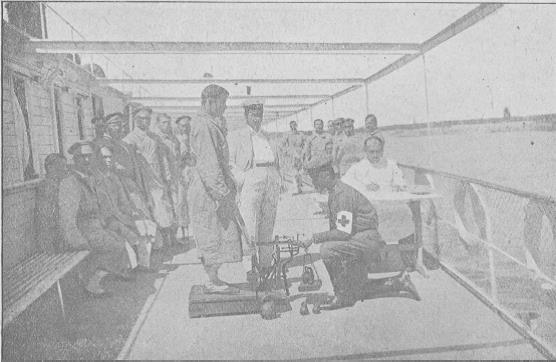 During the First World War, Russia’s government and public organization sent sick and wounded soldiers to various health resorts across the empire. The ideal aim of this project was to heal the combatants with the help of the bountiful nature of the homeland.

In this enterprise, the treatment of tuberculous soldiers in the sanatorium occupied a special place. It had its own history in the form of the people’s sanatorium movement of the pre-war decades, which sought to offer the chance of recuperation to the underprivileged population. Bringing about a mass of the sick and the wounded, the First World War provided an opportunity for the movement to be developed on a large scale, with the rank and file as the main targets, and with the All-Russian Union of Zemstvos and the All-Russian Union of Towns as the main organizers. Taking advantage of the government’s inability to tackle the evacuation of the sick and wounded by its own efforts, these public organizations succeeded in taking part in the management of the bodies of these combatants. Of these agencies, the Union of Towns had less beds at its disposal, but possessed a number of influential physicians, including N. M. Kishkin, L. B. Bertenson, and A. N. Merkulov. Cooperating with the All-Russian League for the Struggle against Tuberculosis and other organizations, the Union of Towns dispatched the patient-soldiers to various regions of the empire, promoted the activities of physiotherapy institutes, and chartered steamboats to be utilized as floating sanatoria. Consideration was also given to the setting up of regional sanatorium networks.

Requiring long-term recuperation, the sanatorium treatment of the soldiers was regarded by the Union of Towns as one of such deals, together with the professional training of the disabled combatants and the provisioning of them with artificial limbs, that would last long after the end of the war. Accordingly, the leaders of the Union of Towns found the sanatorium treatment of the sick and wounded as one of their footholds, with which to continue grasping the power of managing the bodies of soldiers after the end of the war.

Dr. Yoshiro Ikeda is Associate Professor in the Graduate School of Humanities and Sociology at the University of Tokyo. He has been involved in the study of early twentieth-century Russian history across the revolutionary divide, from the First World War via the Revolution of 1917 to the formation of the Bolshevik regime during the civil war. His recent work includes: ‘The homeland’s bountiful nature heals wounded soldiers: Nation building and Russian health resorts during the First World War,’ in Adele Lindenmeyr et al., eds., Russia’s Home Front in War and Revolution, 1914-1922. Book 2. The Experience of War and Revolution (Bloomington: Slavica, 2016); ‘Toward an empire of republics: Transformation of Russia in the age of total war, revolution, and nationalism,’ in Tomohiko Uyama, ed., Comparing Modern Empires: Imperial Rule and Decolonization in the Changing World Order (Sapporo: Slavic-Eurasian Research Center, 2018); ‘Time and the Comintern: Rethinking the cultural impact of the Russian Revolution on Japanese intellectuals,’ in Christopher Balme et al., eds., Culture and Legacy of the Russian Revolution: Rhetoric and Performance – Religious Semantics – Impact on Asia (Berlin: Frank & Timme, 2020)