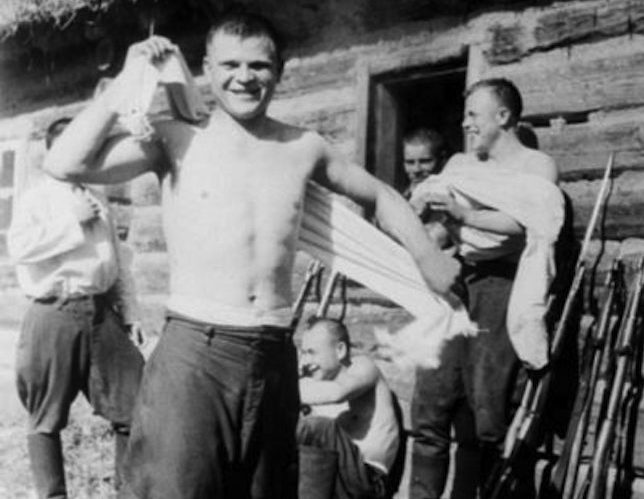 On November 29th, 2016 please join us for “The Soldier’s Body” featuring Brandon Schechter, the Elihu Rose Scholar in Modern Military History in the NYU History Department and a Writer in Residence at the Jordan Center. The event is part of the Occasional series, sponsored by the Jordan Center for the Advanced Study of Russia and co-sponsored by the NYU Department of History.

Brandon Schechter’s book manuscript, Government Issue: The Material Culture of the Red Army 1941-1945 uses everyday objects to tell the story of the Great Patriotic War as never before. The choice to concentrate on objects stems from the fact that it was the uniform world of material goods that united diverse soldiers in the ranks of the Red Army and was often all that separated civilians from soldiers. Each chapter features a series of related objects, such as weapons, uniforms, rations or the knick knacks in a soldier’s backpack, to narrate the experience of people at war and explore the changes taking place in Soviet society in the course of the most destructive conflict in recorded history. Mundane objects such as spoons, shovels, belts and watches are revealed to be as full of meaning and as important to waging war as medals and tanks.

On November 29 he will give a talk based on Chapter 1 of the manuscript “The Soldier’s Body”, which sets the framework for the rest of the book. In the chapter he uses the soldiers’ bodies themselves to highlight the diversity of people drafted into the Red Army. He argues that the state took possession of these bodies via a harsh disciplinary regime and bureaucratic labeling of the soldier via the Red Army Booklet, a mandatory piece of identification, soldiers were cataloged as a resource for the army and tied to the objects that the state issued them. The chapter proceeds to explore how soldiers became the currency of war and the constituents of military units, how they understood this new status and ways in which they tried to undermine the state’s claim over their bodies. Finally, the chapter explores the life cycle of soldiers in the army from draft to wounding and back into the ranks of an unusually fluid and anonymous army.

Brandon Schechter is the Elihu Rose Scholar in Modern Military History in the History Department and a Writer in Residence at the Jordan Center. He received his Ph.D. in History at the University of California Berkeley in 2015. Last year he was a postdoctoral fellow at the Davis Center for Russian and Eurasian Studies at Harvard University. Prior to finishing his Ph.D. he studied at Smolny College, European University in St. Petersburg, Kazan Federal University, The Higher School of Economics (with support from Fulbright IIE) and received a B.A. in Russian Studies from Vassar (2005).

He is currently finishing a book manuscript Government Issue: The Material Culture of the Red Army 1941-1945 which tells the story of the Great Patriotic war through objects from spoons to tanks. His second major project, which he will begin to work on here, is Commissars, Chaplains and Psychiatrists: The Search for Salvation in World War II, a comparative study of the roles of commissars and other political workers in the Red Army with chaplains and psychiatrists in the US Army during the Second World War. Dr. Schechter is on the editorial board of The Journal of Power Institutions of Post-Soviet Societies and has published stand alone articles on women in the Red Army and nationality politics in the Red Army. His research interests focus on violence, material culture and the diversity of experiences based on gender, class and nationality.