Ukraine in Russian Energy Chains: Threat, Temptation and Learning from the Past to Understand Ukraine’s and Europe’s Current Energy Challenges (with Margarita Balmaceda) 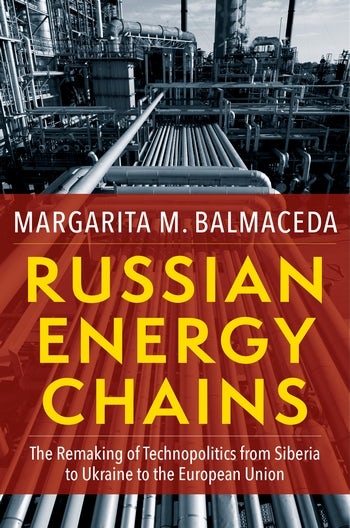 Please join us at the first lecture in this year’s Ukrainian Energy Studies series. The Russian invasion of Ukraine in 2022 has confirmed not only the centrality of energy to the war, but also the importance of Ukraine to global energy policy, with its far-reaching economic, environmental, and cultural consequences. This interdisciplinary series, co-organized by the Jordan Center for the Advanced Study of Russia at NYU and the East European, Russian, Caucasian, and Central Asian Faculty Network at the University of Colorado Boulder, will explore the concept of energy as a shaping force in Ukrainian cultural and political history; the aesthetics of particular energy sources (fossil fuels, nuclear energy, renewables) in Ukrainian literature, film, and other media; the Russia-Ukraine energy nexus; Ukrainian energy markets; and environmental effects of energy production, consumption, and catastrophe.

Energy entanglements and supply chains involving actors in Russia, Ukraine, and  the European Union are key for understanding the sources is as well as directions of the current crisis of Russian aggressive posturing vis-a-vis Ukraine. These entanglements, however, cannot be fully understood unless we look at them from the prism of both threat and temptation. Following three energy molecules (a natural gas molecule, an oil molecule. and a coal molecule) traveling from production jn Siberia to final use in Germany, Margarita Balmaceda’s new book, , Russian Energy Chains: the Remaking of Technopolitics from Siberia to Ukraine to the European Union (Columbia U.P., 2021) analyzes the the threat and temptation embodied in these chains. This presentation, will highlight how different aspects of this triangular relationship. as well as the materiality differences between natural gas, oil and coal as discussed in the book play a key role for understanding the current crisis – from the uniqueness of Russian domestic energy politics to the tensions in EU and German policy affecting their responses. Chapter one of the book is  available in open access as background (see attachment or above link).

Margarita M. Balmaceda is Professor of Diplomacy and International Relations at Seton Hall University. Concurrently, she is an Associate at the Harvard Ukrainian Research Institute (HURI), and heads the Study Group on “Energy materiality: Infrastructure, Spatiality and Power” at the HWK Hanse Wissenschaftskolleg (Germany).  Her research analyzes the connections between natural resources, international relationships and political development, with a special expertise in energy politics (oil, natural gas, coal, nuclear, renewables), steel and the metallurgical sector in Ukraine, the former USSR, and the EU. Capitalizing on her Ukrainian, Russian, Hungarian and German skills, in addition to her native Spanish, she has conducted extensive research in Ukraine, Russia, Belarus, Lithuania, Moldova, Hungary, Germany and Finland. This work has been supported by, among others, a Marie Skłodowska–Curie Fellowship from the European Commission, a Woodrow Wilson Fellowship, and two Fulbright awards. Following up on her work on coal and steel in Ukraine, she will spend the 2022-2023 as a Fulbright research fellow at the Institute for Advanced Sustainability Studies (IASS) in Potsdam, Germany, studying the geopolitics if industrial carbon and insdustrial decarbonization involving Ukraine, Russia, and China. Her books include Russian Energy Chains: the Remaking of  Technopolitics from Siberia to  Ukraine to the European Union (New York: Columbia University Press 2021), The Politics of Energy Dependency: Ukraine, Belarus and Lithuania Between Domestic Oligarchs and Russian Pressure (U. of Toronto Press, 2013), Living the High Life in Minsk: Russian Energy Rents, Domestic Populism and Belarus’ Impending Crisis (CEU Press, 2014), and Energy Dependency, Politics and Corruption in the Former Soviet Union (Routledge, 2008).