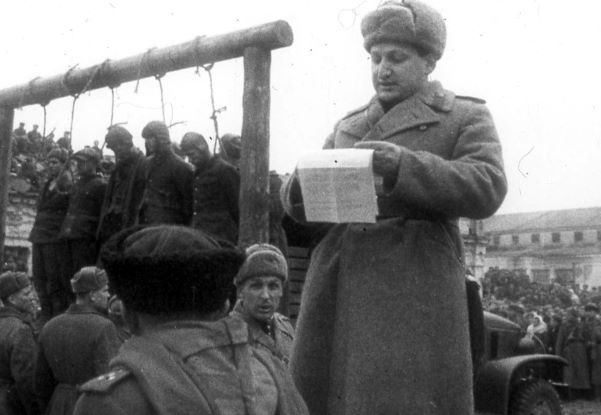 Please join us on Friday, April 26, 2019 for a talk by Vanessa Voisin associate researcher at the CERCEC (EHESS/CNRS). This event is part of the Elihu Rose Lectures in Modern Military History and is co-sponsored by the Jordan Center for the Advanced Study of Russia.

Soviet justice is overwhelmingly considered by the scholarship as sham justice, serving any goals except the rule of law.This presentation will focus on a specific type of political cases, namely the trials of presumed collaborators during the Nazi occupation of the Soviet Union. It will show how these cases relied on previous practices of political justice in the USSR while also revealing interesting changes and innovations in legal practices (understood here both as a legal and political issue). Most recent estimates put the number of Soviet collaborators at a very high number (hundreds of thousands, out of an occupied population of about 75-80 million, plus 2 million surviving POWs). But levels of collaboration varied greatly, from petty assistance to active participation in the genocidal policy of the occupiers, from brief involvement in some economic functions to ongoing commitment to criminal activity. How did Soviet justice treat these various cases, given the precocity of the first liberations of territory (December 1941), the significant diversity of occupied territories and the specific character of Soviet repressive policy (partly ‘legal’, partly extralegal)? Finally, was the 1955 amnesty of collaborators under Khrushchev a kind of re-assessment of Stalinist war purges?

Vanessa Voisin is an associate researcher at the CERCEC (EHESS/CNRS) where she supervises a 5-year collective program on the Nazi war crimes trials in Central and Eastern Europe, from 1943 to 1991 (« WW2CRIMESONTRIAL1943-91 », 2017-2021) and co-supervises the French part of a European project devoted to the « Visual History of the Holocaust. Rethinking Curation at the Digital Age » (H2020 project,2019-2023).  Specialist of Soviet history, Vanessa Voisin devoted a monograph to the repressive mechanisms set up by the Soviet Party-State during the Second World War (war purges), but to also the political and cultural mark this war left on Soviet society (2015). She drew her conclusions based both upon scholarship on Soviet repression and social conflicts and upon literature on the Western war purges (épuration). After the PhD, she contributed to the collective program « CINESOV 1939-1949 » on the Soviet cinema at war (especially the newsreels production and distribution in Ukraine, Belarus and Southern Russia) (books in 2015 and 2018).

This event is open to the public; must have valid ID to enter the building. Brought to you with the generous support of Elihu Rose. For any questions, please contact Brandon Schechter, bms12@nyu.edu.