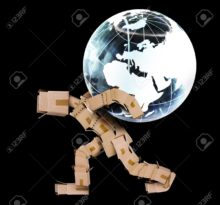 Frane Karabatic is a graduate student in the Slavic Department at the University of Kansas.

Probably, at some point in life, we’ve all heard a story about how someone had left their home country for different reasons, starting a new life from scratch, in whatever world they ended up in. Going through the interlocutor’s dusty photos (that no one has dared to touch for years) it would be impossible not to feel some compassion for their loss. What is it about those physical objects, like pictures, that has such a deep emotional effect on us? Are they just a reminder of our own suffering and longing? Of the past and present– showing us our own development over time? The word development feels like a double-edged sword. No matter if the story is from a long time ago or from the present, the compassion and fellow-feeling hit hard, with no mercy.

In modern days, no matter how well equipped we are with fancy gadgets, when leaving one’s own country, there is no way of escaping the loneliness, shame, fear, confusion, and intimidation of adjusting in a new environment. It follows us around like a shadow, waiting for the right moment to catch up with us, and revealing its face everywhere. Precisely this shadow will make a person be weak or strong when adjusting to a new place. This shadow will always be there, but it is important to learn how to live with it, accepting it as being part of us, making us all equal, but unique and beautiful in this world we are living in.

Someone can argue that being an immigrant in modern time is easier than ever before – it is easier to be in touch with everyone we have left behind, it is easier to travel, and to see loved ones. True, but being a modern immigrant brings a new set of problems. It is embarrassing to say – but let’s face it – in the 21st century the question of race, religion and sexuality is rising again. This poses an additional burden on whoever tries to find a better life…

Leaving Croatia was a personal choice

I remember the day before I had an interview for my US visa, I was going through my wardrobe, picking out my finest clothes. I need to look well, and I need to present myself in the best possible way. I was intimidated, I was petrified, I was scared. I didn’t know what to expect (the fear of the unknown). I wasn’t afraid of not getting my visa based on my documentation (a job was waiting for me, everything was sorted out), I was afraid they would say DENIED based on my behavior/appearance. I know my manners, I know how to behave – but how would they view this Croatian guy that tries to enter to their country. How will they view my good behavior? Is there a cultural difference between us, will we fit into each other’s cultural frames? My head was spinning. I didn’t even leave my home town, I’m not even at the airport to leave my country and I was already lost.

Cold, serious faces that greeted me at the entrance gate of the Embassy, asking for my ID, showed me the way to the metal detector. This put even more pressure on me. Once I passed all the security, and was eventually standing face-to-face with the official representative of the United States (who, as I was telling to myself, had power over me and my destiny) all the fear, confusion, and burden I had put on myself suddenly disappeared.  This face on the other side of the glass divider greeted me with a smiling face, asking me how I was doing, and apologized for his bad Croatian. We had a really nice chat in Croatian, before moving to a serious matter in English… He was a gift from heaven. When it was all over, he looked at me, with a smile on his face, and said in perfect Croatian: Vaša viza je odobrena [You have been approved].

Today, when I look back at that situation, I am convinced that this man must have seen the fear in my eyes, my confusion. He was, most of all, a human being, and not just a random person doing his job. He had compassion for another human being. I wonder what would have happened if he hadn’t made the effort to be warm and friendly before getting to the serious business of the conversation. Would I have fallen apart, ruining my chances to start a new life? I don’t know the answer to this question, and I never will, but the only thing I know for sure is that I regret never saying Thank You…

Even today I still remember that feeling I had after I was done with my visa appointment. Happy, but at the same time also so sad. I was sad of leaving everything and everyone. Leaving the entire life I have built, and starting again from the beginning. But I was ready to do so, or at least I thought I was.

When I reached Chicago, my first stop in the U.S., I had that smiling face of the man from the embassy in front of my eyes, convinced that everything was going according to plan. For me he was the embodiment of the United States of America. Or was I wrong… Reaching the customs at the airport, suddenly all the confusion and fear came out in a second. I realized I’m still not in the States. There is one more face-to-face encounter to go through. Suddenly all those feeling/thoughts that I had before going to the embassy were back. I was trying to calm myself, thinking of that smiling face, and how everything is going to be just fine. No, this face-to-face conversation was cruel, cold, superior and frightening. The lashing questions about terrorism, drugs, rape – illegal actions in general – were coming out from this deep voice. While he was holding my passport, I was looking at his badge that was shining on his shirt, thinking how he definitely has power over me, could really mark my destiny. I managed to pull myself together, and follow his rules. Finally, he told me: Welcome to the United States of America, giving me my passport back. He was looking at me again, but suddenly he was just a regular man.

Today, I am trying to justify that situation by saying to myself that this person was just doing his job. He was testing me, I was telling to myself. Later I found out that all these questions were just part of the process. However, I can’t help but think that there was perhaps a different and better way of asking all those questions. Could he have been more human, more compassionate?

I have no photos, but I do have shadows…

I did it, I’m here, I succeeded – I was telling myself, while locking the door of my new home around 1 a.m. for the very first time. Suddenly, I remembered the scene from the plane when I was sitting in my seat looking at the TV screen in front of me. There it was – a plane in the middle of the Atlantic Ocean with no land in front or behind it. All I could see was a blue screen, with a small white dot in the middle. I desperately wanted to see my family, more than anything I wanted to grab my bag, search for something connected to them, a picture, an object…something to hold on to. There was nothing. All I had was my memory of them at home, and me flying further and further away from them. I closed my eyes, and the memories were just flashing by. That was the only comfort I could get. That was the only thing I had.

I looked around my new home and saw nothing. Just the empty walls, and not a single object around me. I was alone, left with my memories. With time I learned how to deal with nostalgia, the easiest of all the burdens that an immigrant carries around. It was time to adjust, start working, to live a normal everyday life. It was time to deal with the shadows that walked behind me, getting ready for face-to-face encounter. It was time to stop living in-between places, and just to pick one, to just be determined about where I belong. Still today I question where I belong. I belong to different places, mutually excluding each other; legally a citizen of one country but with legal permission to work/live in another county. Going back home is like going on vacation, always glad to go and enjoy the time with family and friends…but again, I don’t belong there… and here, I am an alien too, a legal alien.

I am lucky, I am Caucasian

At this point it has been years that I’m not living in Croatia anymore. Most of these years I have spent living in the Unites States, with some gaps in between when I moved for work to different countries in Europe, I have always considered the U.S. my new home. I am here again, with the intention to stay. I enjoyed my time around Europe, but there was something out there, the same feeling I had in childhood that was drawing me out of those places… I wanted to leave. I wanted to go to the United States of America. I couldn’t forget everything that the country gave me, the possibilities I had work-wise, a life I created here. I worked hard to achieve my goals, I fought with my shadows, creating new memories. However, I need to be brutally honest and say that I consider myself very lucky. Yes, sadly that is true. All I had in life was pure luck. Every time I travel, filling out the required documentation – when I check the boxes of race: Caucasian and gender: Male – it hits me how lucky I am. I never thought that these boxes on a piece of paper will play a crucial part in someone’s life. In the 21st century to be faced with these artificial boxes is unthinkable. But unfortunately, with the realities we are facing these days it is inevitable not to think about this.  It could easily be me, I tell myself every time when travelling. What if only I was born somewhere else? What if I was a Muslim, a woman, or black? My life could have been completely different. It might be that I wouldn’t get that smile on the other side of a glass divider, greeting me and chatting with me in my native language. It might be that I would never hear the greeting Welcome to the United States of America. It shouldn’t be just because someone is white, and fits the stereotypical boxes, that he has privilege in life. We are all born equal, unique in our own way, and beautiful. Don’t we all deserve the equal right to live, to fight for our better tomorrow?