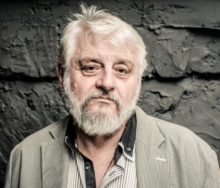 In 2018, Boris Khersonskii / Borys Khersons’kyi (b. 1950), Ukraine’s most famous Russian-language poet, wrote on Facebook—in Ukrainian: “My credo is: in Odesa, obstruct the Russian language gently, but oppose boorishness on the part of Russian cultural stars decisively. I write this as a mostly Russophone person.” What triggered this turn against Russian by one of its most sophisticated artistic users? Is the shift to Ukrainian in Khersonskii’s linguistic practice consistent and irreversible? And, if a leading Russophone poets takes such a dim view of the language, can the end of Russian-language literature in what the Russian state arrogantly calls its “near abroad” be far behind?

Code-switching by previously Russophone Ukrainian writers like Vladimir Rafeenko (Puleri), or programmatic assertions of “love” for Ukrainian (e.g. Khersonskii’s declaration that “a citizen of Ukraine is obliged to know the state language, to respect and to love it”), seem to suggest as much. Can bilingual practice preserve a habitat for the language beyond Russian borders despite Putin’s invasion, which for many discredits Russian as the “language of the aggressor”? In the essay that follows, I seek to answer this question by zooming in on Khersonskii’s poetic bilingualism following Euromaidan and Russia’s occupation of southeastern Ukraine in 2014.

The Odesite Boris Khersonskii emerged in the 1970s as a poet in Russophone Ukrainian samizdat. He became known to a broader Russian audience in 2006 when the Moscow-based publishing house Novoe literaturnoe obozrenie issued the second edition of his most acclaimed volume of poems so far, Semeinyi arkhiv (The Family Archive), which was translated into several languages, including Ukrainian (Rodynnyi arkhiv).

Khersonskii gained even wider popularity when, following the Euromaidan revolution of winter 2013/2014, he used social media to promote support for Ukraine’s choice of a western European model of democracy and critiqued Russia’s neo-imperial interference in southeastern Ukraine. These events prompted him, a native speaker of Russian who had always written in Russian only, to consider self-translation and code-switching to Ukrainian. In a post from March 3, 2014, Khersonskii framed a planned lecture in Ukrainian as an explicit political performance: “[Russian:] Tomorrow I will lecture in the state language, [Ukrainian:] i.e., Ukrainian. This will not just be a lecture, but an action. Forgive me for any Russianisms that may occur.”

With this political gesture, Khersonskii placed himself at the forefront of the post-Euromaidan socio-linguistic development Volodymyr Kulyk calls “double Russian-Ukrainian identification,” deliberately using Ukrainian to signal loyalty to the state. Linguistic performances of patriotism, however, did not diminish the pluralistic landscape of language use in Ukraine, instead enhancing the popularity of older hybrid linguistic practices like the highly differentiated use of Ukrainian, Russian, and the hybrid variety known as surzhyk in various communicative contexts and parts of Ukraine, as well as non-accommodating bilingualism. In line with this perpetually complex linguistic landscape, literary studies have also been eager to apply a complicating, hybridizing approach. For Marco Puleri, “Ukrainian hybridity entails practices of dis-identification.”

Applying a similarly deconstructive, dis-identifying technique to the study of linguistic practices in Boris Khersonskii’s poetry, I will first investigate his linguistic choices in recent, still predominantly monolingual book publications. I will next consider explicit statements on bilingualism and self-translation the poet has published on his blog, contrasting them with the blog’s actual linguistic performance. Detecting the languages used in the posts and quantifying the corresponding findings offers insight into Khersonskii’s anti-hegemonic code-switching and the broader context of the flexible bilingual practices that mitigate language conflict in Ukraine.

How consistent is Boris Khersonskii’s code-switching in his main métier—literature? In 2018, he published two almost entirely monolingual books: the first, Stalina ne bulo (There Was no Stalin), in Ukrainian, and the second, Odesskaia intelligentsiia (The Odessite Intelligentsia), in Russian. What is more, the vast majority of Khersonskii’s pre- and post-Euromaidan book publications have been in Russian: Missa in tempore belli / Messa vo vremena voiny (A Mass in the Time of War), Otkrytyi dnevnik (Open Diary), Kosmonash (The Cosmos Is Ours), Kaby ne raduga (If there Was no Rainbow), and Vdvoem (The Two of Us, with Liudmila Khersonskaia).

On the other hand, starting in 2016, Khersonskii’s Ukrainian literary output also includes like the Ukrainian version of his poetry collection Rodynnyi arkhiv ta inshi virshi (The Family Archive and Other Verses), translated by both himself and Mar’iana Kiianovs’ka. The only truly bilingual volume consists of ten Russian and seven Ukrainian essays under the monolingual Ukrainian title Klaptykova kovdra (Crazy Quilt). Stalina ne bulo, from early 2018, is the third book Khersonskii wrote in Ukrainian—without a translator, but with the help of editor Iurii Vynnychuk. This volume put an end to the consistently Russophone poetic practice to which the Odesa poet had adhered since the 1970s.

Khersonskii’s recent book publications, including both volumes he published in 2018, thus exhibit an internal monolingualism. Apart from original poems in Ukrainian, Stalina ne bulo also contains self-translations from 2016 and 2017. Because the Russian originals of these poems are not reproduced in the book, their status as self-translations is de-emphasized and the book remains monolingually Ukrainian. The very names of translators are omitted, while information about the book’s editor, Iurii Vynnychuk, preserves only an indirect trace of the poems’ Russian origins.

In the case of the Russian-language Odesskaia intelligentsiia, which appeared about ten months after Stalina ne bulo, the monolingualism is comparable. Khersonskii’s apparent separation of his Russian- and Ukrainian-language literary production in this period recalls the monolingual literary norms of the nineteenth century. Yet on closer examination, the initial impression of double monolingualism turns out to be deceptive.

The key to understanding Khersonskii’s double monolingualism after 2016 lies within the poet’s linguistic performances on his Facebook-based blog. Here, the poet posts fresh poems before they are published offline; uploads old photographs and fictional stories about “Odesa’s Intelligentsia;” and encourages offline reading through naïve pictures of kittens and girls with books. Since the winter of 2013, he has also polemically reacted to political developments around Ukraine and Russia and ironically undermined allegations of “Russophobia” directed against him. Khersonskii’s blog, which has followers in Ukraine and the pro-Ukrainian community worldwide, not only presents as what Sally McGrane has called a “daily symposium on the identity of the new Ukraine,” but also reflects on language choice through performative meta-language.

It is illuminating to consider Khersonskii alongside other self-translators, for instance the late-Soviet Kyrgyz writer Chingiz Aitmatov. Aitmatov translated himself into the major imperial language of Russian, whereas Khersonskii has gone in the opposite direction, translating his Russian work into Ukrainian, a language long suppressed by its imperial neighbor. For a citizen of Russophone Odesa and a blogger addressing a translocal community, Ukrainian is the linguistic option with significantly less reach. Yet Khersonskii’s choice to translate himself into Ukrainian is not only an anti-imperial, patriotic gesture, but also an act of anti-hegemonic code-switching performed for the sake of an imagined Ukrainophone Ukraine.