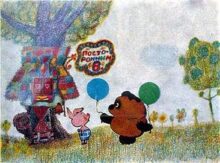 This is Part I in a two-part series. Part II will follow on Thursday, 2/25.

The story of the Russian Winnie the Pooh, or “Vinni Pukh,” is inextricably tied to the experience of readers who enjoyed the book in the 1960s and 1970s, as well as to viewers of eponymous cartoons released in 1969, 1971, and 1972. Vinni Pukh holds a special place in the hearts of many Russophones, but is a very different character than the one familiar to English speakers.

In fact, upon discovering the English-language Winnie the Pooh, many Russian speakers feel surprised and claim, justifiably or not, that “ours is better.” He is certainly more Russian. It is almost unimaginable to a Russian speaker that “another” Vinni Pukh exists. Just imagine that the American Star Wars turned out, in fact, to be an adaptation of a story based in a different culture. However “authentic” the “original,” fans of the “adaptation” are unlikely to care: Star Wars is, by now, well established as American. Similarly, Vinni Pukh has lodged himself so firmly in the Russian imaginary that most Russophones see him as a fundamentally Russian bear, though with an English connection.

The Russian Vinni Pukh “looks more like a potato than a traditional bear and is beloved by the older generations,” writes Galina Zakhoder, the wife of Boris Zakhoder, the writer and translator who gave the bear his Russian identity. In Boris Zakhoder’s own words, he “re-told [pereskazal]” A.A. Milne’s story in Russian rather than simply translating it. Zakhoder’s “Vinni Pukh and so on and so on and so on [Vinni Pukh i vse-vse-vse]” was first published by the publishing house Detskii Mir in 1960, and has since become a Russian classic.

What does it mean to “re-tell” the story as opposed to translating it? According to translation scholar Lawrence Venuti, a translation always “domesticates” the original, that is, reframes it in terms of the tropes and beliefs of the receiving culture. Every translator is a prism that reflects the original according to his or her own understanding. While Venuti criticizes this “domestication” as potentially colonial (domesticating the foreign), Zakhoder took a markedly different approach. His goal, as he states in his History of My Publications, was not to domesticate the original, but to tell it afresh. Per Zakhoder, “There is only one way to translate the untranslated, and that is — to write it anew.” In contrast to Venuti’s hypothetical translation-as-colonization, Zakhoder’s work makes no attempt to change the original source. The idea is, instead, to write in another language in the spirit of the original — so that it looks Russian, feels Russian, but A. A. Milne remains its author.

What does this look like in practice? In Chapter 5, for instance, a terrified Piglet cries out for help, shouting:

Zakhoder sticks to the spirit of this untranslatable play on words, but deploys the resources of Russian. The result is innovative, funny, and yet faithful to the original.

Here, A.A. Milne’s “Holl, holl” is replaced with the neologism “Slonoul,” which combines the Russian “karaul [help]” with “slon [elephant].” Alexandra Borisenko, a Russian translation scholar, compares Zakhoder to “an accomplished word juggler, who can juggle three words (‘karaul [help],’ ‘uzhasnyi [horrible],’ and ‘Slonopotam [Heffalump]’),” in contrast to lesser translators like Victor Veber, who “limits himself to two words, and even those he can barely handle.” Reading Zakhoder’s Vinni Pukh is thus also a linguistic pleasure, similar to, yet different from the English version.

In addition to rendering A.A. Milne’s linguistic games into a form more legible to the Russian reader,  Zakhoder made a host of subtler changes that root the narrative not only in Russian language, but in Russophone culture. The most important such change is that Zakhoder’s retelling has two audiences: children and adults. Zakhoder weakens the story’s frame — the illusion that we are overhearing a children’s story about a bear, told by a father to his little son.

Instead, in Zakhoder’s version, Vinni Pukh stands on his own, without much support from a little boy’s imagination, and possesses a much more mature and ironic view of the world than his English counterpart. The Russian reader is encouraged to relate to and befried Vinni Pukh directly, without Christopher Robin’s mediation and the boy’s somewhat condescending view of the bear as a toy with “very little brain.” Zakhoder creatively remakes this phrase as v golove opilki, meaning, “wood shavings in the head.” In the Soviet Union, toy bears were in fact usually stuffed with wood shavings. Therefore, in Zakhoder’s version, the bear is quite self-aware and pragmatic, conscious enough of his essence to comment upon it with gentle irony. The translator’s Vinni Pukh is thus familiar and canny, rather than merely silly.