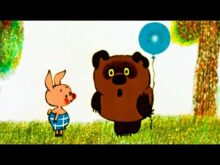 Whereas the English Winnie-the-Pooh tells its story through Christopher Robin, Zakhoder invites us to relate to the bear directly. For example, here is how A.A. Milne’s original describes the way Winnie-the-Pooh acquired a balloon for his honey project:

Well, it just happened that you had been to a party the day before at the house of your friend Piglet, and you had balloons at the party. You had had a big green balloon.

These words are spoken by the father to his son [emphasis added]. Zakhoder’s story instead says that “Christopher Robin happened to be at the party of his friend Pyatachok [Piglet] the day before.” In the Russian version, readers are thus simply reading about Christopher Robin, rather than being identified with the little boy hearing his father’s story.

Moreover, Zakhoder shifts the original’s idyllic description of childhood play into subtly ironic register that only adults can truly appreciate. Natalia Smolyarova, a scholar of Russian literature, describes how people queued up to get their hands on Zakhoder’s Vinni Pukh in the 1960s and 70s: “There were long lines for the book in libraries and among friends; people exchanged the book, looked for it and for a long time could not find it neither at book markets nor the black market.”

Zakhoder’s book, and later Fyodor Khitriuk’s Vinni Pukh cartoons (made together with Zakhoder), re-cast the novel as a work that adults might enjoy. Zakhoder introduced many references to the adult world and sharpened the text’s absurdity. Take the song Pooh sings as he floats up, balloon in hand, to the beehive. A. Milne’s version is an innocent ditty about floating in the sky — “How sweet to be a Cloud / Floating in the Blue! / Every little cloud. / Always sings aloud” (emphasis in original). Zakhoder’s song, meanwhile, highlights the contrast between the black bear and the blue sky: “I am a Cloud, a Cloud, a Cloud, / And of course not a bear, / Oh, it is so enjoyable for a Cloud to float in the sky!” Vinni Pukh’s insistence that he is a cloud, and not a bear, along with his emphasis on the pleasure of floating makes Zakhoder’s creation more absurd than the original.

Finally, Zakhoder’s Vinni Pukh tends to make snarky comments that speak directly to adult reality. On his way to the beehive, Zakhoder’s Vinni Pukh visits “a certain acquaintance” — a puddle (“k odnoi znakomoi luzhe”) — and rolls around in the mud. The expression to “visit a certain acquaintance” is rather idiomatic in Russian and it is borrowed from adult language. A. A. Milne’s version simply says, “Winnie-the-Pooh went to a very muddy place that he knew of.”

Similarly, when Vinni Pukh wants to visit his other acquaintance, Rabbit, he says that “Rabbit is fitting company [podhodyashaya kompania],” which again draws on adult language (“fitting” is a parental assessment, after all!) and makes the whole phrase sound ironic. Smolyarova explains the book’s multilayered humor as instantly accessible to adults, but only gradually legible to children. “The book was funny,” she writes, “but whereas adults understood the humor right away, children had to grow into it gradually, each at their own individual pace.” In his History of My Publications, Zakhoder compares the absurd significance of Vinni Pukh to Don Quixote, Hamlet, and the traditional Russian figure of the holy fool, among others. This version of Winnie-the-Pooh is a far cry from the silly English bear who exclaims “O bother!” and frequently gets himself into trouble bad enough that only Christopher Robin can save him. The Russian Vinni Pukh is often absurd, but his childish absurdity is rather profound.

Of course, in the English-speaking world, Winnie-the-Pooh is not just a product of A. A. Milne’s book. The character has also been popularized by Disney, through cartoon films like Winnie-the-Pooh and the Honey Tree (1966). These came out around the same time as the Soviet animated series directed by Fyodor Khitriuk, Vinni Pukh (1969), Vinni Pukh idyot v gosti (1971), and Vinni Pukh i den’ zabot (1972). In the Russian-speaking world, these Soviet-era cartoons have long been audience favorites.

While the language of the animated stories is still Zakhoder’s, the visuals were created by Fyodor Khitriuk and using the scope of Unlimited Graphic Design Service by his animators, Eduard Nazarov and Vladimir Zuikov. Nazarov remembers the collaborative process of creating Vinni Pukh thus:

At first Volodya Zuikov brought a completely unimaginable character. It looked not like a bear, but like a mad dandelion — a creature of ambiguous proportions, woolly, spiky, as if made from an old mop … But there was something in it!… We all started working on this miserable creature, and at the end, under his [Khitriuk’s] guidance, we shaped him up.

As a “mad dandelion” or “potato,” Khitriuk’s Vinni Pukh is endearing precisely because of his simplicity and lack of realism. He is not meant to look like a bear — he is a cartoon character in the pared-down visual style that made Khitriuk famous. His first animated feature, The History of a Crime (1962) already marked a striking departure from Disney in Soviet animation. The Vinni Pukh series continues this trend: the two-dimensional backgrounds look like a child’s pencil drawing, while the sparingly rendered characters and bright colors have the feel of a handmade object. Yuri Leving, a scholar of Russian literature and film, calls Khitriuk’s animation style “the art of being an idiot,” commenting on the animator’s “naïve” “camerawork,” — reminiscent of the early twentieth-century Russian avant-garde — his two-dimensional backgrounds, and his use of comic gags to punctuate the story’s turning points. In short, the Soviet Vinni Pukh looks nothing like his Disney relative and behaves in rather different ways as well.

Though Boris Zakhoder, the storyteller, and Fyodor Khitriuk, the director, did not get along (one of the reasons the series ceased after only three episodes), the animated renderings breathed lasting life into Vinni Pukh, making him recognizable in every Soviet household. Voiced by famous Soviet actors, the characters of Vinni Pukh (Yevgeny Leonov), Piglet (Iya Savvina), Owl (Zinaida Naryshkina), and Ia-ia [Eeyore] (Erast Garin) also acquired distinctive personalities. Fyodor Khitriuk explains how much the actors contributed to the creation of their characters’:

The success of the animation depends to large extent on the actor’s voice. The success of Vinni Pukh, for example, to a large extent depended on Leonov…. These great actors did not [simply] declaim their lines – their personality came from within.

And on this note, I would like to invite everyone to watch the Russian Vinni Pukh, even with subtitles. A. A. Milne and Disney’s Winnie-the-Pooh have a Russian cousin — with his own distinctive personality.