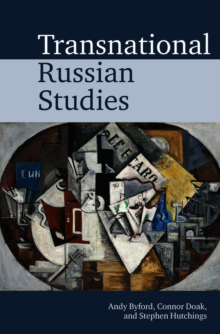 Andy Byford is Professor of Russian at the University of Durham.

Connor Doak is Lecturer in Russian at the University of Bristol.

Stephen Hutchings is Professor of Russian Studies at the University of Manchester.

What does it mean to study “All the Russias”? This blog’s name tantalizingly points in different directions simultaneously. Its origins lie in “Emperor of All the Russias,” the usual, if imperfect, English rendering of “Imperator Vserossiisskii,” the title taken by all Tsars from Peter the Great to Nicholas II. “All-Russian Emperor” might be a more accurate translation, but it lacks the grandeur of “Emperor of All the Russias,” which so easily spills over into parody, as fans of Star Trek can attest.

Yet divorced from its imperial origins, “All the Russias” might also signify a pluralist approach signaling not so much Russian expansionism as the myriad and diverse forms that “Russian” culture, history, and even language have taken across time and space. In place of a stable, unitary “Russia,” “All the Russias” invokes multiple Russias, reinvented and reimagined over the centuries, and spilling beyond the geopolitical boundaries normally taken to be Russia’s limits.

Such an approach underpins Transnational Russian Studies, a new volume edited by Andy Byford, Connor Doak, and Stephen Hutchings, just published by Liverpool University Press. Our book opens up the map of Russian Studies beyond Russia, treating Russian culture as an expanding and contested field that extends in not always predictable ways across multiple national borders. We recognize that the Russian Empire, the Soviet Union, and the Russian Federation are transnational formations in themselves: multi-ethnic and multilingual spaces with fraught internal dynamics. “Russianness,” therefore, is perpetually in flux, and it is a concept not only “made in Russia,” but also fashioned elsewhere by Russia’s interactions with the wider world through processes of nation-making, empire-building, migration, translation, cultural exchange, and inter-state competition.

Yet Transnational Russian Studies does not simply advocate a broadening of the geographical remit of Russian Studies. We also call for a critical re-examination of the epistemological assumptions that have long underpinned our field. Like our colleagues in French or German Studies, our field arguably remains indebted to a Herderian paradigm that fetishizes discrete “national” blocs, each with its own unique language, culture, and history. Our undergraduate and graduate programs traditionally equip students with mastery of the language, and a broad overview of Russian literature, culture, and history, before the students move on to specialize in a particular field. Such an approach has many benefits: to use Clifford Geertz’s term, it allows for “thick description” of Russian culture, to appreciate the web of relationships between language, culture, and history, and to resist imposing universalist or “Western” paradigms on the Russian context.

However, we must be aware that such an approach also leaves us vulnerable to a kind of methodological nationalism, providing an epistemological reinforcement of the political boundary-work that divides nation from nation. Our vision of Russian Studies not only includes expertise in Russian language and culture, but a critical interrogation of the boundaries around “Russia” and “Russainness,” while also attending to the transnational flows of people, languages, ideas, and culture across those boundaries.

Why transnational and not, say, global? As Ian Tyrrell has argued, the term transnational signals a distance from the “deterministic and unidirectional juggernaut of globalization”; it does not presuppose the inevitable convergence of economies, political systems, or cultures associated with globalization theory. For Russianists, globalization evokes the transitology of the 1990s, whereby Russia was assumed to be following an inevitable path toward a market economy and liberal democracy, a vision interrupted by the turn to authoritarianism under Vladimir Putin.

While the introduction to our volume sets out our vision for Russian Studies in broad, theoretical terms, the bulk of the book is made up of nineteen chapters spread across four sections. The first of these, “Nation, Empire, and Beyond,” explores the various geopolitical and geocultural frames that have been used to understand Russia from the imperial period through to the present day. Our contributors explore Russia’s relationship to (post)colonialism (Vera Tolz), cultural exchange in the Russian Empire’s western borderlands (Amelia Glaser), and in Central Asia (Olga Maiorova), as well as representations of space in post-Soviet cinema (Dušan Radunović) and the geopolitics of Vladimir Sorokin’s satire Telluria (Tatiana Filimonova).

Part II, “Beyond and Between Languages,” explores the role that language, especially in the realm of literature, plays in the transnational flow of culture, both as a facilitator and an obstacle to cross-cultural communication. Contributors examine the view of world literature in Viktor Shklovskii’s A Sentimental Journey (Galin Tihanov), the (mis)readings of Vladimir Nabokov as canonical author of world literature by the latter’s more recent representatives (Marijeta Bozovic), the “Englishing” of the Russian nineteenth-century novel by Penguin Books through their approach to translation (Cathy McAteer), the politico-cultural role of translation within the multilingual Soviet Union (Sergey Tyulenev and Vitaly Nuriev), and the continuing, yet problematic, place of the Russian language in contemporary avant-garde drama from Belarus and Ukraine (Julie Curtis).

The third part, “Cultures Crossing Borders,” examines how Russian ideas and culture are exported, transposed, and come into conflict abroad. Contributors discuss the transnational performance history of Russian opera and the problem of its “Russianness” (Philip Bullock), the Russian film industry’s attempt to beat Hollywood at its own game (Stephen Norris), Russian constructions of gender and sexuality and their relationship to national identity (Connor Doak), how two contemporary African novelists have drawn on, and responded to, the Russian novel of ideas (Jeanne-Marie Jackson), and finally, a critical exploration of Russian appropriations of “imperfection” as a supposedly national aesthetics (Ellen Rutten).

Finally, Part IV, “Russia Going Global,” treats the Russian Federation’s attempts to become a major player in what Putin has called a multipolar world, as well as Russia’s determination to forge its own political path outside liberal democracy, and the various responses to these trends. Our contributors discuss Russia’s attempt to establish a “sovereign internet” (Michael Gorham), the broadcaster RT as a tool of Russian global influence (Stephen Hutchings), Meduza as a “transnational” yet “Russo-centric” news outlet (Vlad Strukov), and a sociolinguistic study of how Russians living in the UK negotiate their competing national identities and allegiances  (Lara Ryazanova-Clarke).

Our volume is one of a small flurry of recent publications that advocate a new, broader Russian Studies. These include Global Russian Cultures (2019), edited by Kevin Platt, a volume that proudly vaunts its “opposition to the bounded and unitary conceptions of culture and identity that are most often associated with national projects in and around Russia,” focusing instead principally on Russian diaspora cultures. By contrast, Russian Cultures in the Age of Globalization (2018), edited by Vlad Strukov and Sarah Hudspith, looks at Russian culture of the past decade in relation to globalization. Here, globalization is seen not simply as an outside force foisted on the Russian Federation by the West; rather, Russia—the state, as well as its writers and other cultural figures—are understood as subjects in their own right with the agency to engage with globalization and re-shape it to their own ends.

We believe that expertise in the Russian language and a keen understanding of Russian literature, history, and culture will always form the bedrock of Russian Studies. However, we argue for an expanded, more inclusive understanding of what constitutes “Russia,” as well as a reexamination of the methodologies and implicit assumptions of our field. Such a move is timely not least because of the turn to populist nationalism that is taking place across the world. Russian Studies (and modern languages more generally) should strive to be at the forefront in a world where national identity is not only fiercely contested, but used and abused. Our case for a transnational Russian Studies is developed more fully in the introduction to our volume, which is available here.