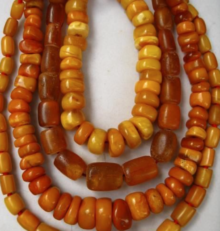 This post features the second-prize entry in All the Russias’ second Graduate Student Essay Competition.

Sarah Wood holds a BA from the University of Kentucky, where she double-majored in Russian and Integrated Strategic Communication. She travelled to Ukraine as a Fulbright U.S. Student in 2018. She is currently pursuing an MA at the Patterson School of Diplomacy and International Commerce at UK, where she is majoring in Intelligence/Security and minoring in Diplomacy.

Walking through the underground malls of Kyiv, through tourist shops in the streets of Odessa, markets in small-town Olevsk, and even the Carpathian Mountain town of Yaremche, foreigners and locals alike are hard-pressed to overlook the gold-glimmering, unique jewelry that decorates the walls and tables of vendors’ booths across Ukraine. At first glance, this exceptional charm may seem harmless, but the process of extracting this material, and the illicit trade surrounding it, are quite troubling. Ukraine is facing an ongoing armed conflict in the East and “amber wars” in the West, effectively forcing the already fragile country into a two-front battle. While the conflict in the East has garnered much attention in the last few years, the illegal amber market plaguing Ukraine’s northwestern region is virtually unknown to the international community.

Illegal amber mining in northwestern Ukraine is one of the country’s most critical, yet most underground issues. Amber is fossilized tree resin that can be extracted using large pumps and deforestation techniques. These methods are highly damaging to the environment, but that fact does not deter miners or corrupted officials from profiting from Ukraine’s most valuable natural resource. The illegal amber trade is comprised of locals who mine to earn a living, organized criminal gangs, and many state officials and high-level authorities who profit off of the lucrative  underground market.

Only two legal amber mining firms exist in the country, both reporting less than 1,587 pounds of the 300 tons of tree sap extracted each year. Essentially, around 90% of Ukraine’s natural amber is extracted illegally. Millions of dollars are lost each year as illicit exchanges sidestep Ukraine’s approved budget. Amber exists mostly in underdeveloped regions where job prospects are scarce, forcing the local population, including many children, to illegally extract, transport, and sell amber on the black market to buyers in China and the Middle East. Violence and “turf wars” due to the amber trade are not uncommon in the region, posing a threat to local populations.

The amber trade issues occurring in northwestern Ukraine highlight some critical ethical concerns in the country that have international implications. Chief among these is internal corruption that prevents Ukraine from becoming a member of the European Union. According to the European Parliament, Ukraine’s membership to the EU has been postponed partly due to “widespread corruption” that “continues to hamper Ukraine’s reform process.” Amber extraction is also explicitly condemned in the EU Association Agreement with Ukraine.

Ironically, large EU firms bought much of the lumber cleared in illegal deforestation from amber mining in 2017, and EU company officials were actually involved in a corruption scheme to cover up the fact that EU firms were buying wood from regions where “rampant illegal forest clearance for amber mining” was evident. EU firms are still one of the top consumers in the region and continue to buy lumber from areas where there is clear evidence of illegal deforestation for amber extraction. Essentially, the EU firms are financing the very corruption and illegal amber extraction that European leaders publicly condemn in their report on Ukraine.

Here we have an ethical issue on two fronts. First, Ukraine’s corruption, environmental exploitation, and child labor in illegal amber extraction within its borders should taint the integrity of officials and other enablers of unethical actions. Additionally, EU firms and officials that were complicit in corruption and the financing of these activities should be held to the same standards that the EU is requiring of Ukraine for membership. The illegal amber trade threatens Ukraine’s legitimacy as a prospective EU member state, undermines international trade norms, and highlights a level of corruption that, were it to spread, would likely debilitate the international economic system. It is estimated that nearly 50,000 Ukrainians would lose their source of income if the illegal amber mines were shut down.

It would be nearly impossible to clear amber out of the malls and markets scattered across the country. Nevertheless, the EU must hold officials and EU firms accountable, and Ukrainian lawmakers must take steps to combat this issue and create reasonable guidelines, policies, and safe tools that allow for legal amber extraction in the region.