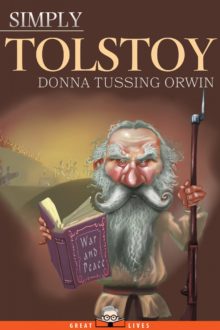 Ani Kokobobo is Assistant Professor of Slavic Languages and Literatures at the University of Kansas and Editor of the Tolstoy Studies Journal.

The following interview with Donna Orwin, Professor of Russian Literature at the University of Toronto, originally appeared in Tolstoy Commons, the blog of the Tolstoy Studies Journal.

We heard that Donna Orwin had just published a new book on Tolstoy, Simply Tolstoy, and had to find out all about it.

Ani Kokobobo: Donna, first of all, congratulations on a beautiful manuscript that manages to be both gripping and erudite!

Tell us a bit about your new Tolstoy project, what is the intended audience? How will it benefit colleagues teaching at the university level?

Donna Orwin: I was very impressed by Charles Carlini’s idea of commissioning short books about great figures in the arts and sciences. Tolstoy himself founded a publishing house called Intermediary to bring high culture to a broad audience, and it seems to me that Carlini wants to do the same thing. The books are available online, in audio, and in hard copy, and the fact that they are inexpensive is key to making them accessible. This struck me as a great way to reach out to people using new media, and in a time when the humanities need to justify themselves to the public. I’ve tried to write a book that can be used in courses and by scholars in other fields who want a brief introduction to Tolstoy as well as suggestions as to where to turn next.

AK: How might you have approached this project, a biography of Tolstoy, in a unique way as a literary scholar? There are several other biographies out there, so we would like to know what makes this one unique.

DO: The book is short; I think that is very important. Of course I depend on the ideas of others, and one of my tasks in the book is to summarize them in an accessible way. At the same time, it has allowed me, even forced me, to see where I stand on the issues that drew me to Tolstoy in the first place. I was attracted by the Tolstoyan question of how I should live my life, so I naturally moved from the artistic works to Tolstoy’s diaries and letters where he wrestles with this. The book focuses overall on the interaction between Tolstoy’s life and the creative process. While I believe that Tolstoy’s masterpieces would be just as gripping if their author were anonymous, the fact that we do know so much about him allows us to think about that central issue. A related theme is Tolstoy’s didacticism; I wish I had a dollar for every time I’ve had to defend him against this charge. I don’t deny that he is a moralist, but I do believe that his concern about the good elevates his art. In the book, I try to show how this happens, and also when it interferes with the art.

AK: You have studied Tolstoy for many years, but one is always immersed in the process of discovery in our line of work. Can you tell us of some new things that you discovered about Tolstoy in the course of writing this new book?

DO: I have spent much more time studying the earlier Tolstoy. The book forced me to read a lot of the later Tolstoy that I had not read or did not know. I came away very impressed, understanding better how his later art and tracts recruited people from all over the world to Tolstoyanism. Tolstoy is the kind of radical writer who tells the truth as he sees it without regard for the consequences. He could do that because he was a kind of anarchic individualist, both an insider and outsider, that modern Russian culture produces. On the one hand, he was an aristocrat whom even the tsar was afraid to touch, especially after he had written his great novels. And on the other hand, in his later years he stayed out of politics, didn’t take sides, didn’t even really himself participate in Tolstoyanism. You can hold that against him as a man – his great biographer and translator Aylmer Maude did – but it allowed him to say and see things that the political man can’t.

AK: Having studied Tolstoy for years, but especially after writing this book, how troubled do you think Tolstoy was, as a man and thinker, in his later years?

DO: I think that he was always troubled in that he thought about things taboo for most of us. As someone who lost his parents early, he thought a lot about death, and worked hard to figure out ways to both confront and thwart it. Those ways – sex, soldiering, family, writing, good works – paradoxically gave Tolstoy a rich life and the world great works of art, but they didn’t solve the problems. Once he grew old, of course, death was still there looming, and it got harder and harder to avoid it. His later works like Death of Ivan Ilych and Master and Man are frightening and liberating at the same time.

AK: On a related note, can you share any new wisdom you acquired on the Tolstoy marriage in the course of this project?

DO: Like all long term relationships, the marriage was complicated and went through many stages. You should be careful what you wish for. Tolstoy married a woman with the hope that they could share everything, and that they would become one soul. This was another experiment by the radical individual to overcome his isolation. Sofya Andreevna, who was a remarkable, intense human being in her own right, was enchanted by her closeness to her husband, whom she worshipped. But their intimacy became stifling for both of them in the end.